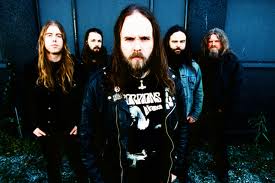 Cam Pipes’s obsession with Iron Maiden’s Powerslave goes back more than a few years. The heavy-metal landmark introduced him to the joys of ear-busting rock when he was eight.

“My buddy who lived on the same street as me would bring over all his Twisted Sister tapes and things like that,” recalls the bearded frontman for Vancouver’s 3 Inches of Blood, “and then one day he brings over Powerslave and it’s like ”˜Wow.’ That’s sort of what did it for me.”

Flash forward a couple of decades, and Pipes is kicking back with the Georgia Straight in the East Vancouver apartment of 3IOB guitarist Shane Clark. You can tell the second you walk in the door that you’re in hangout heaven for a hard-rock fan. A Rush 2112 banner takes up one entire wall; a rare Motorhead LP is prominently displayed on a shelf over the stereo like it’s the Holy Grail. And inside a glass-doored cabinet, below a still-in-the-packaging Freddy Krueger action figure and a fancy bottle containing pretty liquid and the body of a black scorpion, are a pair of tickets to this weekend’s sold-out AC/DC show.

“I think we’re shooting a video and I don’t think I can go,” explains Clark from the kitchen, where he’s chilling up a couple of Pilsners. The second concert the bearded longhair ever saw was Acca Dacca at B.C. Place, on the late-’80s Blow Up Your Video tour, and he doesn’t sound thrilled about missing them this time around.

On the floor next to the display case lie a couple rows of well-worn LPs, but a quick gander doesn’t reveal anything by Iron Maiden, the biggest musical influence on 3 Inches of Blood. He does confirm that the original Powerslave album he got as a kid is in there somewhere, though.

“For me, it was specifically a [Maiden] song called ”˜The Trooper’,” relates Clark. “When I was about 10 or 11 we had a family friend who made a mix tape for me that had stuff like Dio, Iron Maiden, AC/DC on there. This was stuff my parents never listened to—my dad listened to the Who or Led Zeppelin, maybe—but that mix tape really got me excited about life.”

Although 3 Inches of Blood takes a thrashier approach to metal than Iron Maiden ever did—and Pipes’s high-pitched vocals owe much more to Rob Halford than to Bruce Dickinson—the Maiden influence still permeates all four of its CDs, from 2002’s Battlecry Under a Winter Sun to the cheerily titled Here Waits Thy Doom, which is set for release on September 8.

That’s the first 3IOB disc to feature Surrey skinbasher Ash Pearson, who took over the drum kit from Alexei Rodriguez, who was canned after playing on the 2007 Roadrunner disc, Fire Up the Blades. (Details are sketchy and facts unconfirmed, but Rodriguez was let go after an altercation at a British metal festival that left him with a broken elbow and the drummer for Saxon with a black eye.)

“One big change to this album is the actual process that we went through to make it,” notes Clark, who writes most of the group’s music with coguitarist Justin Hagberg, before Pipes comes in with the fantastical lyrics that colour such tracks as “Swordmaster”, “Forest King”, and “Destroy the Orcs”. “We’re happy with Fire Up the Blades, but Here Waits Thy Doom was kinda recorded the opposite way. We didn’t use a click track for the drums or any triggered sounds.”

“We wanted it to be more organic-sounding,” adds Pipes, “just not as fake as some metal records can sound these days. And lucky for us, Jack, the producer, that’s the kind of mindset he has anyway, because he’s old school, and so are we.”

Jack Endino, who has twiddled knobs for the likes of Nirvana and Soundgarden, was manning the console when the band joined him at Seattle’s Soundhouse Recording last year. One of the best things about Endino’s approach in the studio, according to Clark, was his up-front attitude. “When I was doing guitar stuff, if I just thought, ‘Man, I nailed that shit,’ he would never ever do that Hollywood kinda ass-kissy thing, like ‘Great take, Shane! You sure are doin’ great!’ But if you weren’t playing good he’d be like, ‘Nah, that sucked.’ ”

Having recently signed with a new record label, Century Media, 3 Inches of Blood is hoping to take its Endino-helmed disc and run with it to the very top of the heavy-metal heap—or at least rock the metal-lovin’ socks off a few folks while trying. Clark isn’t too concerned about the possibility that his band might lose some support from long-time followers who were drawn to the death- and black-metal elements instilled by former covocalist Jamie Hooper, whose hellish howling enhanced all of its previous CDs.

“We’re going on three years without Jamie,” he notes, “and I feel like we’ve really accomplished a lot and overcome obstacles and taken the band to the next level since the Ozzfest tour, the first tour he didn’t do. And I think a lot of fans really appreciate the past of the band. But myself, as a metal fan, I look at some of my favourite bands, like Napalm Death, where I love the current lineup. There’s not one original guy in that band, and I like their old shit, but I like the new as well.”

“Some people have their preferences to eras,” pipes in Pipes. “Some will be like, ”˜Oh, I only liked Metallica up until Master of Puppets—everything after that was worth shit,’ you know. There’s always gonna be those kinds of people, but what can you do? They’re probably not gonna come to our shows anyway, if that’s their attitude, so that’s fine.”