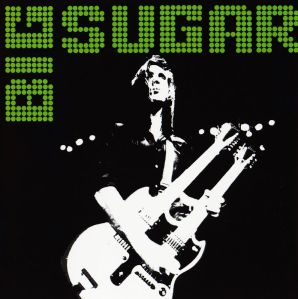 The cover of the new Big Sugar CD, Brothers and Sisters, Are You Ready?, features a classic hard-rock image of a skinny, longhaired fellow flailing away on a doubleneck Gibson guitar. If you didn’t know the guy was Big Sugar singer-guitarist Gordie Johnson, you’d probably think it was none other than Jimmy Page.

“I guess that’s the first thing that comes to mind,” says Johnson, on the line from his Hogtown home. “And I like Led Zeppelin enough—certainly as a kid I listened to them. But, you know, if I have to pick between Zeppelin and Black Sabbath, I pick Sabbath.”

Tony Iommi may have been the riff master who influenced Johnson as a youngster, but it was actually Canadian rock hero Alex Lifeson who turned him on to the joys of the twin-neck guitar. “He gave me my first doubleneck,” explains Johnson, “and just sort of handed it to me as a source of inspiration. I didn’t figure that I would actually play the thing—I just held it up as this iconic sort of talisman to have in the studio—but I ended up writing almost the entire Hemivision album around it. It sort of galvanized the creative process.”

Johnson was mighty pleased about scoring the sacred heavy-metal tool from the influential Rush guitarist—the first concert he saw as a teenager was Rush at Cobo Hall in Detroit—but after a year or so he felt compelled to give it back. For one thing, Lifeson had bestowed his other prized doubleneck on Texas guitar wizard Eric Johnson, from whom it had promptly been stolen. “Alex was quite upset that, of his two famous guitars, he had no idea where one was,” Johnson relates. “And I just kinda felt like, ‘This is too awesome a thing—it should be in the Rock and Roll Hall of Fame, not with me in Mexico at a video shoot.’ Plus, it was breaking my back.”

After Johnson returned Lifeson’s classic axe, Gibson built him his own doubleneck, and he’s collected a few others in his travels. He takes three of them on tour, so they’ll surely be in evidence when Big Sugar plays two shows at the Commodore on Friday and Sunday (September 28 and 30). Hopefully, so will the new CD’s three standout tracks: “Bad Old Days”, “All Hell for a Basement”, and “Nashville Grass”. The latter tune tells of Johnson’s experiences at last year’s funeral for Allman Brothers/Gov’t Mule bassist Allen Woody, who was a good friend and touring partner of his. “Somewhere down in Tennessee,” sings Johnson, “the scene was all too much for me to bear/All his good friends gathered around, on a Nashville bedding ground/Nashville grass let the sun burn brown, ashes to ashes we all fall down/We all have to stand in the same judgment for a lifetime lived and a lifetime spent.”

“It was kind of a blow,” Johnson says of Woody’s sudden passing, “so that was a tough song to write, but singin’ it makes it a little bit easier. It’s kinda therapeutic, as opposed to just letting it remain all pent up.” (Although Brothers and Sisters remembers Woody in song, it’s actually dedicated, in the liner notes, to another of Johnson’s fallen comrades, former MuchMusic VJ Dan Gallagher. He died of a heart attack last year, after cowriting several tunes for Big Sugar, including the well-known “Digging a Hole”.)

Like “Nashville Grass”, “All Hell for a Basement” is a compelling track that makes you wonder why the band’s semicheesy pop ditties, like “So Not Over”, ever get chosen as singles, and then are played to death by stations like Rock 101. According to Johnson, “all hell for a basement” is a phrase that was first used to describe the geography of Alberta by Rudyard Kipling.

“Don’t get me wrong,” notes Johnson, “I’m not trying to be all literary and hoity-toity. I’m not that well read. But I lived there, and my parents are still there, and it’s just part of the lore of southern Alberta. But that song is actually written about Newfoundlanders who had to pack up their whole town and move to Alberta to make a living. They got jobs in the oil patch and left their fishing boats and that way of life. I thought, ‘Well, what a great Canadian story that is, I should try and sing about it a little bit.’ ”

Johnson’s efforts to turn the spotlight on his homeland are obvious in the closing track of Brothers and Sisters, a feedback-laden instrumental version of “O Canada”. He currently closes every show with a performance of the national anthem. “The fellas in the band have a great deal of national pride,” he says, “and we’re starting to see—especially with the younger factions of our audience—a great deal of nationalism, certainly a great enthusiasm for Canadian music and culture. I applaud that, and just wanted to kind of wave the flag a little bit, you know.”