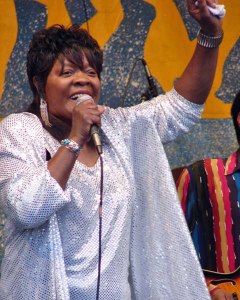 When Koko Taylor was a youngster, living with her poverty-stricken family on a sharecropper’s farm in Tennessee, she used to find joy in her meagre existence through the music B. B. King liked to play. It wasn’t King’s own soulful blues that caught her ear, though; it was what he’d spin on his daily radio show from Memphis.

“That was before he became popular,” Taylor says, on the phone from her long-time base of Chicago. “He played everybody’s records, and that’s the way I heard all of the old tunes from like Muddy [Waters] and Big Mama [Thornton], Memphis Minnie. You know, I’m talkin’ people way back there, uh-huh. That’s all they was playin’ back in them days, there wasn’t no riff-raff and hip-hop and all of that—it was either blues or jazz.”

Moving to Chicago to look for work at the age of 18, the blues-loving Taylor would frequent the Windy City’s south-side bars, where Waters, Howlin’ Wolf, and Magic Sam were regular performers. The budding vocalist cleaned houses during the day and sat in on jam sessions at night. After one such gig in 1962, she was approached by blues legend Willie Dixon, who gave the future “Queen of the Blues” her first big break.

“He was my right arm,” Taylor says, “and he was the first man carried me down to Chess Records, and did my first recording. That tune was called “What Kind of Man Is This?”, and it was a tune that Dixon wrote. He was a great writer and a great song arranger, and he was the one who got my feet on solid rock, so I could go on with my career.”

Dixon produced two albums and several singles for Taylor, including the million-selling 1965 hit, “Wang Dang Doodle”, which has since become her signature song. Over the years her powerful voice has compelled some of America’s best-known blues guitarists to record with her, including Buddy Guy, Albert Collins, Kenny Wayne Shepherd, and her old radio fave, B. B. King. But she’s loath to try and single out her favourite picker.

“I never thought about that, really,” she relates. “You know, as long as they’re playin’ behind me and they sound good, that’s all that matters.”

Taylor and her five-band piece, the Blues Machine, play the Yale Hotel on Tuesday (September 30), two days after the Grammy Award–winning singer turns 75. She’s still touring as steadily as she was when she was 40, and doing her best to live up to her grand title.

“I’m honoured to be called the Queen of the Blues,” she says, “because the public gave me the name, and I guess they gave it to me because they could see, when I go on-stage, that I put my whole heart into what I’m doin’. It’s not just somethin’ that comes outta my mouth.”