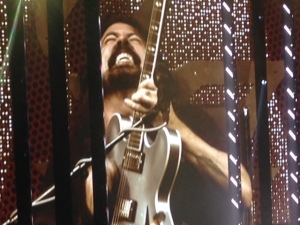 all crappy iPhone photos by the Newt

Nobody really expects a millionaire rock star to, after breaking his leg falling off a stage, design a special chair–or “rock throne”, if  you will–that allows him to get around like royalty on stage. Is it a burning need to rock out that compels a fellow to go to such lengths? Or is it more to do with an outta control ego?

Who cares, really, when the result is stunning gigs like the one the injured Dave Grohl and his band the Foo Fighters delivered at Rogers Arena last night. It was the type of fist-pumping, hellraising, anthem-blasting loud-rock show not heard in the ole hockey rink since Metallica blazed through on its Through the Never tour of 2012.

“I like it with the lights on!” Grohl randily announced when the house lights illuminated the crowd after the Foos had opened with “All My Life” and continued the pummeling pace with “Times Like These” and “Learn to Fly”. “We’re gonna be here a long fucking time!,” he told the near-sellout crowd, “are you cool with that?”

During the marathon, 2-1/2 hour riff-fest Grohl rocked about as hard ‘n’ heavy as you could ever expect from a guy seated firmly on his ass. As well as hits like “My Hero”, “Big Me”, and “Arlandria”, the group–which includes lead-guitarist Chris Shiflett, rhythm-guitarist Pat Smear, bassist Nate Mendel, drummer Taylor Hawkins, and touring keyboardist Rami Jaffee from the Wallflowers–paid homage to some of its musical heroes and influences. During the band-member introductions Shiflett made some righteous Van Halen racket with a snippet of “I’m the One”, and then Jaffee followed up with a flurry of organ notes that didn’t impress Grohl in the least. “That was some Wallflowers shit,” the bossman whined, “give me some Foo Fighters shit!” So Mendel tried again, and seconds later the whole band jumped in for a beautiful few bars’ of Neil Young’s “Cinnamon Girl”.

At certain times during the show Grohl’s rock throne was propelled along a catwalk that led out to the middle of the arena. The third time it happened he took an extended solo on his gorgeous, light-blue, signature Gibson ES-335 that included prolonged scraping of its neck against his damaged right leg. “Tonight was the first part of the tour with Gary Clark Jr. opening,” he explained shortly after. “Kinda makes it hard to do a guitar solo after that fucking guy, so I did it on my cast.”

Just before the band reeled out a version of the 1981 Queen & David Bowie hit “Under Pressure”, Grohl urged everyone in attendance to stand on the shoulders of the person next to them, so dozens of concertgoers immediately clambered up on other folks. “You guys’ll do anything!,” he hollered in response to the quick action, “I like that!”

At one point Grohl told a little story about how, when he was in Nirvana, they traveled from Seattle to mix an album at a residence in Vancouver. All over the house were photos of Bryan Adams, so he asked who the owner of the place, the “stalker” of Bryan Adams, was. “It was Bryan Adams!,” he declared, before his band banged out a cover of “Summer of 69” that didn’t get the crowd nearly as worked up as you would have thought.

“Who’s never seen the Foo Fighters before?” asked Grohl at one point, and when a horde of hands went up he made a bewildered face and said, “What the fuck is that all about?” It was my first Foo Fighters show too, but, considering how wicked it was, hopefully not the last. I’m dying to see what godly heights rock monster Grohl can reach on two working legs!