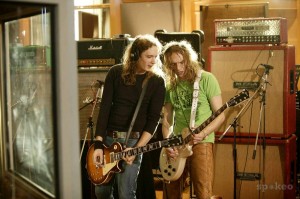 the Hawkins brothers pull off their best Robertson/Gorham impression

Fans of rowdy, old-school, Les Paul–driven guitar rock have a band worth worshipping in British noisemakers the Darkness. The Marshall-powered six-string team of 40-year-old Justin Hawkins and his two-years-younger brother, Dan, really do tear up the frets, both on-stage and on record—as evidenced by their latest disc, Last of Our Kind. And you won’t find a single Stratocaster in their dressing room, because they’re Les Paul all the way, and you can thank their dear old dad for that.

“He had a Les Paul copy, actually,” recalls Dan on the line from his London home, “just a cheap one. Some people when they think of an electric guitar they think Fender Strat, but when my brother and I decided to get our own guitars we just thought Les Paul, so it was my dad’s influence, really.”

The elder Hawkins didn’t inspire his boys with his musical abilities, though. He wasn’t much of a rocker, as it turns out.

“Well, he wanted to be,” notes Dan, “but he’s a builder. And the story goes that he had all the guitars and stuff, but my mom wouldn’t let him play them because she was trying to watch the TV.”

Judging by the fleet-fingered and heavily melodic approach the Hawkinses have taken ever since their 2003 debut, Permission to Land, you’d think that Thin Lizzy would have been a major influence. But they were much too young to have fallen under the harmonic spell of Brian Robertson and Scott Gorham in their prime.

“I’ve evolved from punk-rock kind of influences like Swervedriver,” Dan relates, “and Teenage Fanclub—I used to copy their solos when I was learning to play guitar. And I try to channel a bit of Jimmy Page when I play, sort of hit like the wrong note sometimes, and see where it takes me. At least, that’s what I tell people.

“But I’m not really an actual guitarist,” he adds, talking crazy for a second. “Justin is a born lead guitarist, a real virtuoso, and I only play lead solos when I’m really feeling it—or when I’m forced to.”

Dan might consider his bro godlike on guitar, but it is actually Justin who lavishes praise on his sibling in the tongue-in-cheek bio he penned for Last of Our Kind. For example, the track “Roaring Waters”, in Justin’s words, “features a Dan Hawkins riff that’s so massive, time slows down when you stand next to it”.

The riff in question is a sweet one, no doubt, but it’s also pretty obvious that it owes a bit of its sassy vibe to that famous lick from Aerosmith’s “Walk This Way”.

“It’s got a bit of that sort of swagger to it, doesn’t it,” Dan agrees. “I’ll take that. Joe Perry is an amazing guitarist. Yeah, I’ll have that, definitely.”

All this talk of Les Pauls and riffs and Joe Perry might have you thinking that the Darkness is all about the guitars, and while that’s basically true, it does include a bassist and drummer, too. And the skin-basher in question is none other than Rufus Tiger Taylor, the 24-year-old son of legendary Queen drummer Roger.

“Yeah, how about that?” says Dan proudly. “And he’s more of a rock star than we are! He’s one of those drummers you can’t take your eyes off of. He’s so intense when he plays, so dynamic; he plays every beat like it’s his last. People have already said that they’re just watching him the whole gig.” 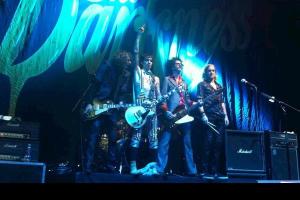 The Darkness plays the Commodore Ballroom in Vancouver this Tuesday (October 13), with guests These Raven Skies.