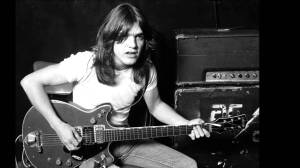 When I interviewed AC/DC‘s Malcolm Young and Brian Johnson back in 1983 I asked Malcolm if he ever had a hankering to step out and play a lead-guitar solo once in a while.

As expected, his response was along the lines of, “Why bother when you’ve got a guy like Angus around?”

(ya gotta crank the volume a bit. It’s AC/DC, after all)

And for those who have difficulty making out the conversation with those wacky AC/DC accents, here’s the transcription:

ME: Do you ever get the urge to step out and play lead, Malcolm?

YOUNG: Yeah! (laughter from bandmates and entourage). They’ve got this big hook umbrella to pull me back in.

ME: But you don’t play much lead…

YOUNG: Aw, I just tinkle. I mean you can’t outdo Angus, you know. It’s a difficult one.”

To hear my full 23-minute interview with Mal and Bri, become a patron of the Newt on Patreon.

One response to “That time AC/DC’s Malcolm Young told me that he just “tinkles” on lead guitar: “You can’t outdo Angus””