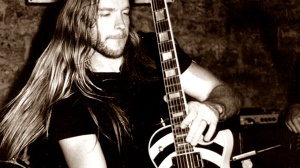 Rock guitarists have a few things to worry about during a live performance—such as blowing an amp, breaking a string, or dropping a pick during a crucial guitar freak-out. Personal injury isn’t usually one of the main onstage concerns for today’s rock artists, but—as Pride & Glory string bender Zakk Wylde learned recently—shit does happen.

“I cracked one of my vertebraes and a rib,” says the 27-year-old rocker, calling from his home in Valencia, California. “I was just out in the audience, they had me on their hands and shit, but then somebody threw me back onstage with my fucking legs out from underneath me. Usually when they toss you back onstage you land on your feet, but they just heaved me and bamm, right on my back.”

Wylde didn’t realize how badly injured he was until four hours after the gig, when he couldn’t get out of the band’s van, and he didn’t undergo a decent medical checkup until two days later. That’s when X-rays revealed that he’d basically broken his back, and his doctor relayed the shocking diagnosis. “It was like, ‘Oh well, no wonder it hurts,’ ” says the Wylde man with a chuckle.

Career-threatening stage dumps notwithstanding, Wylde has quite a bit to smile about these days. As well as holding down the guitar spot in Ozzy Osbourne’s band, he’s doing things his own way with Pride & Glory, a southern-rock power trio that’s been making waves of late with its self-titled release on heavyweight Geffen Records. He’ll be showcasing tunes from that Rick Parashar–produced disc at the Town Pump on Sunday (October 23), then opening for label mates Aerosmith at the Coliseum the next night.

Wylde’s rise to guitar-hero status began when he was still a teenager, when Osbourne plucked the New Jersey native from obscurity to play on his 1988 release, No Rest for the Wicked.

As well as becoming Osbourne’s right-hand axeman, Wylde went on to cowrite all of the material on the bat-biting rocker’s platinum comeback of ’91, No More Tears, as well as putting his heavily amplified stamp on last year’s Grammy-nominated Live and Loud. He is well aware of the legacy that strumming beside Ozzy entails.

“Randy Rhoads is a fuckin’ legend,” he says of Osbourne’s early-’80s guitarist, “and if he hadn’t passed away, he would have gone on to such ridiculous guitar-playing, ’cause he just got better and better with each record. And Jake [Rhoads’s replacement, Jake E. Lee] was awesome, too; I mean Jake had his own thing altogether. And then if you go back to Tony Iommi—genius riffs! I mean you’ve got him and Jimmy Page, you know what I mean?”

Wylde’s high-profile association with Osbourne is what allowed him to get his own band off the ground so fast, and to realize his dreams of jamming with the likes of the Allman Brothers and the reunited Lynyrd Skynyrd. His Pride & Glory project grew out of his intense love for southern rock, but that doesn’t mean the next Ozzy Osbourne recording will show those influences.

“I get away with about as much as I can without Ozzy whippin’ out a shotgun,” he says, “but I don’t think you’ll be hearing any banjo on an Ozzy record.”

Wylde insists that his first priority is Pride & Glory, though.

“Pride & Glory is the thing now,” he says. “I mean, I’m gonna finish up this album with Ozzy because he doesn’t want to go through the whole thing of gettin’ another guitarist. And I fuckin’ love him anyway. I love hangin’ around him. I’ll always be Ozzy’s guitar player, to me.”