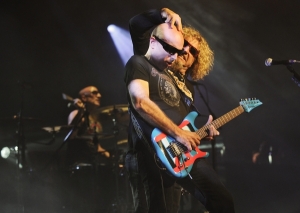 Chickenfoot vs. Van Halen: now there’s a rivalry for ya. There’s never been much love lost between those bands’ respective singers, Sammy Hagar and David Lee Roth. Then there’s the fact that Chickenfoot’s bassist, Michael Anthony, lost his cherished spot in Van Halen when VH shots-caller Eddie Van Halen brought in his own teenage son, Wolfgang, to unceremoniously replace him. And as far as six-string match-ups go, Chickenfoot guitarist Joe Satriani is one of the few axemen who could give the venerable Van Halen a run for his money in the guitar-hero game.

Throw in the anti-Eddie trash talk that Hagar dished out in his 2011 autobiography, Red: My Uncensored Life in Rock, and–with both groups out on tour at the same time–the stage was set for a good old-fashioned rock-off. Vancouverites got to see what Van Halen had goin’ on last month at Rogers Arena, and last night (June 5) at the Queen E. they witnessed Chickenfoot’s best shot. Performance-wise, the latter act easily emerged as champ.

Unlike Roth–who stunk up Rogers Arena with lame-ass vocals–Hagar can still sing. He’s not in Montrose-era shape, vocally, but at 64 he can still muster up an impressive howl. It also helped that he seemed to be having a ball up there, truly enjoying the company of his mates. There didn’t appear to be any such connection between Roth and the Van Halen clan.

“It smells pretty good in here!,” declared Hagar after blasting through “Last Temptation”, one of the top tracks from Chickenfoot’s second album, the strangely titled Chickenfoot III. “Is dope legal in Vancouver?,” he wondered aloud, before commenting on the apparently pissed-up state of his bass player. “You’re fucking ripped!,” he chided Anthony, who countered with: “I do some of my best work when I’m ripped!”

If any of the Chickenfoot members were indeed pounded, it didn’t seem to be affecting their performances. Particularly impressive was drummer Kenny Aronoff, who’s best known for his work with John Mellencamp and John Fogerty. Aronoff handles the kit when C-Footer Chad Smith is on tour with his full-time band the Red Hot Chili Peppers, which–as everyone knows–is a much better band than Chickenfoot.

Although the iffy sound quality in the Queen E. didn’t help, Chickenfoot came off much better last night than it did during its Vancouver debut at the Commodore three years back. That was just before the release of its self-titled debut, which was rife with substandard tracks like “Soap on a Rope” and “Oh Yeah”. The followup–which was coproduced by Vancouver’s Mike Fraser–boasts much stronger material. Not that it would make my Top 10 or anything.

My general disregard for Chickenfoot’s music aside, I must say that the foursome put on a pretty decent show last night. The crowd was on its feet the whole time, lapping up Hagar’s nonstop party vibe. And it definitely didn’t hurt that the band ended the night with the rifftastic stomper from his Montrose days, “Rock Candy”. If anyone has the drum chops to nail Denny Carmassi’s original slamming on that timeless track, it’d be Aronoff.