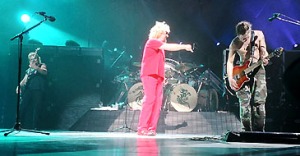 MUCH HAS BEEN made of the Sam & Dave controversy in regard to American hard-rock legends Van Halen. There are those who scoff at the idea of the band existing without original vocalist David Lee Roth, while others feel that his replacement, Sammy Hagar, has done a bang-up job.

Roth’s beast-in-heat vocals certainly suited the raunchy style of music Van Halen introduced to the world in 1978, whereas Hagar’s power-ballad crooning kept the big radio hits coming after 1984. Both singers have contributed greatly to the band, but the fact is, once Eddie Van Halen starts playing guitar, who really cares who’s holding the mike?

That was made abundantly clear as soon as the pioneering fretmaster sauntered onto the Coliseum stage and started tearing off all manner of scintillating, rude, and downright nasty licks. He was just fuckin’ around, warming up as his bandmates made their way from backstage, but there was no denying that, despite a lengthy battle with cancer, Van Halen still brings the dynamite in both hands. It must have been a relief for the roughly 12,000 fans who paid upward of $130 to see the group’s first Vancouver concert in nearly a decade.

“Hello baaabbyyy!” howled Hagar as he led the group into the opening song, the Roth-era “Jump”. Dressed in bright-yellow shirt and pants, red shoes, and a black toque, the previously slim Hagar looked a tad paunchy, as if he’d gone overboard with the pina coladas at his club down in Cabo. Or maybe it was just that bare-chested Eddie V. H. looked about as sinewy and chiselled as he ever has.

Appearances aside, both rockers kept active, Van Halen pulling off his patented leaping scissor kicks and Hagar playing dress-up with the continuous barrage of shirts and jackets tossed his way. (He didn’t bother putting on the bra.) As for the rhythm section, Alex Van Halen continues to be one of the best straight-ahead drummers in rock, and inconspicuous bassist Michael Anthony still brings out that nifty Jack Daniel’s bass for his so-so solo. He even took a healthy swig of Tennessee’s golden throat charmer to prove that he STILL FUCKIN’ ROCKS, MAN!

Highlights of the band’s two-hour-plus set included Eddie’s use of a power drill on his guitar in the intro to “Poundcake” and the near-sellout crowd’s intense reaction to “Ain’t Talkin’ Bout Love” (another Roth-era staple).

Lowlights were Hagar’s failed attempt at getting a fan to flash her tits (betcha Dave coulda got the job done) and a couple of forgettable new cuts off the group’s latest compilation, Best of Both Worlds. Hey, ya gotta sell that “new” product, ’cause the coconut juice in Sammy’s drink doesn’t come cheap. But here’s a profitable idea: how about locking Eddie in the studio with just his guitar and the tape rolling? I know a lot of people who would pay good money for a solo album’s worth of him just fuckin’ around.