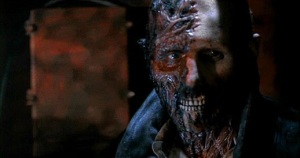 I remember Darkman, partly because it was one of the first movies I ever got paid to review, way back in the fall of 1990.

I also remember Darkman because it was one hell of an entertaining horror-thriller, which is what I’d come to expect from director Sam Raimi, the guy behind Evil Dead.

The good news is that on Feb. 18 Scream Factory, the genre-movie line distributed by Shout! Factory, is releasing a Blu-ray version of Darkman that is jam-packed with all-new interviews, including ones with stars Liam Neeson, Frances McDormand, and Larry Drake, as well as makeup-FX artist Tony Gardner, production designer Randy Ser, and art director Philip Dagort. 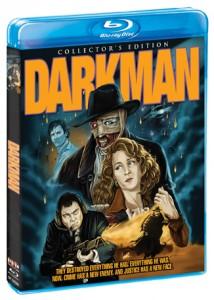 The disc also includes audio commentary with director of photography Bill Pope and vintage “making of” featurettes with Raimi, Neeson and McDormand.

To jog your memory about how awesome Darkman was, here’s my review from the Aug. 30, 1990, issue of Vancouver’s Georgia Straight.

Sam Raimi has finally done it. The director of the wildly imaginative Evil Dead films has shunned the Freddy/Jason syndrome and come up with a brand new deformed killer who horror audiences can cheer for without feeling guilty. This new creation, Darkman, doesn’t slaughter one innocent teen during the entire duration of the film that bears his name—he only wipes out murderous criminal scumbags who deserve to die anyway!

There’s a lot more to Darkman than blood-letting, though. Raimi’s $14-million project is a thrilling comic-book-style adventure that goes for the heart but uses romance and tragedy in lieu of an eight-inch blade.

Irish actor Liam Neeson portrays the title character, who we first meet as Dr. Peyton Westlake, a brilliant scientist on the verge of a breakthrough in the study of synthetic skin. He’s deeply in love with attorney Julie Hastings (Mississippi Burning’s Oscar-nominated Frances McDormand), and things are looking real rosy—until suave and sadistic hit-man Durant (Larry Drake, L.A. Law’s Benny) turns up in search of an incriminating memo that his boss, played by Colin Friels, wants real bad. Durant and his henchmen do a number on Westlake that leaves him a horrifically scarred, bandaged loner.

That’s when Danny Elfman’s sweeping score rolls in and the juices of vengeance start to flow. The love of his life thinks he’s dead, and even if she knew otherwise, how could any woman love a guy with a face like that?

Darkman stews over that prospect while holed up in an abandoned factory. Having scavenged the remains of his blown-up laboratory, he sets up shop once again, this time using his past research to create lifelike disguises that perfectly resemble those who wronged him. This is where the real fun starts, as Darkman impersonates the various baddies and causes them all manner of grief. But he has to race against the clock, because the synthetic skin he uses has a habit of dissolving.

Darkman’s super make-up effects are only one dish in a smorgasbord of visual delights. The film’s two main drawbacks—Elfman’s occasionally grating score and the phony-looking matte work that pops up in the climactic chase scene—are hardly enough to seriously flaw Raimi’s sleek exercise in thrills and belly-laughs. And all four principal actors deliver strong performances, and there are great lines, like McDormand’s “If you’re not going to kill me, I have some things to do.”

Now that I know the answer to the question put forth in all those promotional ads—“Who is Darkman?”—all I can say is, “When’s Darkman II?”