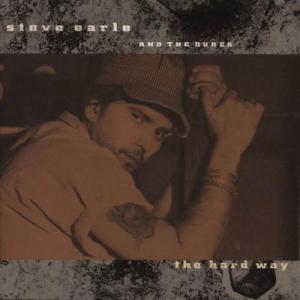 Steve Earle’s got a headache—a real doozie. The whirlwind promotional tour that brought him to Vancouver’s Georgian Court Hotel has taken its toll, and while this scribbler waits in the lobby, Earle’s up in his room, downing aspirins to ease the pain brought on by countless flights and time-zone changes.

More high-falutin’ “rock stars” might use the first sign of discomfort as a reason to cancel all but the most essential dealings with the press, but not Earle. With a half-hearted grin he strides in, long hair flying, and sits his blue-jeaned butt down. He’s got some important things to say about the songs on his new album The Hard Way and the heartfelt, real-life experiences they relate.

Earle, who is coming to the Orpheum October 21, steels himself with a swig of steaming coffee and starts off with a run-down of his approach to following up his highly successful Copperhead Road album of ’88.

“When I got off the road after the Copperhead tour, and could concentrate on nothin’ but the record, I ascertained pretty quickly that, number one, I was gonna make a band record, because the band was smokin’. I wanted to focus the sound a bit more than I had on Copperhead. And I knew I was writing a very personal record—the most personal record I’d written since Guitar Town—so I had to immediately guard against writing personal things that nobody else could relate to. Like people don’t want to hear you feeling sorry for yourself because you’re riding around in a bus that cost more than their house.”

To help give The Hard Way that close personal feel, Earle enlisted various people from his immediate family to help out on some songs. His brother Patrick played percussion and added vocals, his sons Justin and Ian sang on the background chorus of “Regular Guy”, as did his stepdaughter Amy Dotson. Most notable was the vocal assistance of Earle’s sister, Stacey Earle Mims, because she’ll be joining her bro’s touring band on guitar this year.

“She’s always written songs,” drawls Earle, “and she’s always sung, and she’s always been real good. But she started having babies at a pretty early age. Her kids are just now getting old enough that she feels like she can take a serious run at it, so she’s moved to Nashville. She’s been living at my house, taking care of it, for about a year now. Her kids are there too. But she’s writing, and the stuff’s getting stronger all the time. In fact, I’m just an up-tempo song away from putting together a tape of her in my own studio and trying to get her a record deal.”

Not surprisingly, the Earle household was always a musical one when Steve and Stacey were tykes.

“It’s funny,” he says, “I remember seein’ my dad’s high school annual, where they have these caricatures with predictions of what they were gonna be. And in my dad’s case, they showed him with one of those big old RCA microphones, ’cause he was in a barbershop quartet when he was in high school.

“So my parents sang, and we always had a piano in the house. My dad played the ukulele, that kinda stuff.”

Like his pop, the younger Earle has recently been attracted to a small guitar-like instrument, in his case the mandolin. He first used it on the title track of the Copperhead Road album, and it has become a lot more prominent on The Hard Way.

“The only song I knew on mandolin when I recorded Copperhead Road was ‘Copperhead Road’, but on the Dylan tour I had the mandolin out a lot. It’s more portable than guitar, and because most of the time we’d just do the gig and sleep on the bus, I was just wandering around all these big venues bangin’ on the mandolin the whole time. So I ended up writin’ four or five new songs on this record on mandolin rather than guitar.

“And it’s a whole different instrument—it’s different tuning, a little more Celtic, and a little darker. Even ‘Justice in Ontario’ is mandolin-based because that story…I couldn’t find a sound dark enough for it. That song almost didn’t get written—until I got hold of an electric mandolin and ran it through a Marshall amp. It’s pretty scary sounding.”

“Justice in Ontario” is based on a murder that occurred in Port Hope, Ontario, for which several members of the Satan’s Choice motorcycle gang went to jail, while the supposed trigger man got off scot-free. Various other songs on The Hard Way, like “The Other Kind” and “This Highway’s Mine (Roadmaster)”, also portray Earle as the type of live-free-or-die person that would empathize with the life-style and plight of the biker. The skull and crossbones tattoo on his right arm, with the words “Fear No Evil”, adds to Earle’s Harley mystique.

“Well, I do ride,” proffers Earle, “that’s my major activity outside of music. I’ve never been a clubber; I’m just not a joiner. But I grew up very much in that element. Where I went to high school, you either went to college or you joined the Banditos. And I was exempt only because I played music. So it’s nothing foreign to me. I don’t agree with a lot of things that people associate with bike clubs, some of which are unfair and some of which, let’s face it, the police have really capitalized and played on.”

Earle feels that it was public opinion about motorcycle gangs—egged on by police accusations—that was mainly responsible for the false convictions of the bikers in the Port Hope incident. His viewpoint is clear from the lyrics of “Justice in Ontario”:

“Blue smoke still hung in the air/No one spoke when the cops got there/Well the local constable made the call/when Corporal Hall walked in the room/with his picture book and a list of names/One by one the witnesses came/and they told him what he wanted to know/Justice in Ontario.”

Having run into trouble with the law himself—he was choked unconscious with a cop’s nightstick after his ’87 New Year’s Eve concert in Dallas—Earle doesn’t hesitate to take a stand against what he feels is unjust. But he’s aware of the inherent danger of fighting the system.

“There’s some concern about reprisals,” he says, “ because the O.P.P. (Ontario Provincial Police) is obviously not gonna be thrilled. My hope is that I’ll be far too out-in-the-open and far too public for the police to do anything and get away with it. But the point is, that’s not a reason for doing or not doing anything, because…I very nearly went to prison myself for something I didn’t do, simply because a law enforcement agency didn’t want to admit that somebody had fucked up—they didn’t want to open the whole can of worms and all the other complaints that were constantly brought against the Dallas police department. You can’t stand by and let stuff like that go down without saying anything about it.

“And I think I especially have a responsibility to do that, ’cause if I didn’t have any money right now I’d be in prison in Texas—I’m convinced of that. It was that close. But I was able to afford decent legal representation. And it comes down to the fact that people who can’t afford decent legal representation—who are subject to something like this happening and turning out very badly—feed my kids. That’s where my money comes from and that’s where my freedom comes from.”

“Billy Austin” is another song on The Hard Way in which Earle was able to make his point on a subject he feels strongly about—capital punishment. Loosely based on the life and death of executed criminal Gary Gilmore, the song pulls no punches with its harrowing tale of a man sentenced to die in the electric chair:

“So when the preacher comes to get me/and they shave off all my hair/Could you pull that switch yourself sir/with a sure and steady hand/Could you still tell yourself/that you’re better than I am.”

Even before writing “Billy Austin”, Earle made his anti-capital punishment stance public. During each show on the Copperhead Road tour, he devoted Bruce Springsteen’s “Nebraska” to then-recently executed Ted Bundy.

“Capital punishment is one of a lot of steps backwards that people have decided to take in my country,” says Earle. “And I think it’s because they’re frustrated—they see themselves and their government as impotent, and it makes them feel better when the government can effectively do something about a monster like Ted Bundy. But what I’m hoping to show people is that most of those on death row have more in common with them than they do with Ted Bundy, no matter what they’ve done.

But Earle admits that his position on the death penalty is not one that most of his current fans easily take to heart. “I think that probably the vast majority of my fans, right now, are pro-capital punishment, because my audience is primarily working class. Last year when I did ‘Nebraska’ in the shows, you could feel it got uncomfortable—and even up here in Canada. But the deal is, they didn’t leave, and they didn’t throw things. They listened; they did listen. I got people thinking about it, if nothing else.”