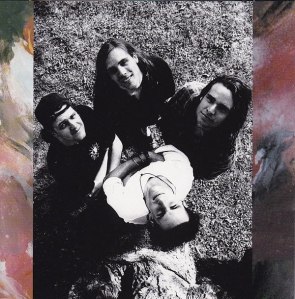 Although it was based on a riveting short story, Stephen King’s Children of the Corn was quite possibly the worst film of 1984, one that could have buried the careers of stars Peter Horton and Linda Hamilton. The only memorable thing about the film was the demented performance of Courtney Gaines as Malakai, the most slow-witted and sadistic of the movie’s several young killers.

“That would have been where we first heard the name Malakai itself,” says Chris Swail, lead vocalist for Ottawa’s Fun for Malakaï (the band members decided to add the umlaut). “It sounded a little too dark and macabre by itself, though, so we tried to lighten it up.”

Fun for Malakaï is a band that seems destined to make a lasting name for itself on the Canadian music scene. Yours truly was so impressed by the band’s 1992 release, Reverie, that I put it on my top-10 list of the year, right up there with fellow Ontarians Strange Days and the Tragically Hip. And from the sound of things, Fun for Malakaï won’t be the only Ottawa band we’ll be hearing from in the ’90s.

“It’s a pretty happening scene,” says Swail, calling from the Manx, an Ottawa pub he became a partner in two months ago. “Furnaceface are getting huge right now, I guess you’ve heard about them. And the people in Ottawa seem to really be supporting local music, as well. We’ve sold a fair chunk of CDs down here, and our shows are very well received, so it’s not one of those situations where bands get bigger from outside of their own vicinity.”

The Ottawa area’s burgeoning original scene—which includes such acts as Mystic Zealots, Fishtales, and the Age of Faith—is well represented on Plug, a compilation CD that has just been released on Ottawa’s One Handed Records, with national distribution through Cargo Records. The 23-song, 11-band disc was produced by Furnaceface keyboardist Marty Jones, who also co-produced Reverie, along with veteran Ottawa musician/playwright Ian Tamblyn.

Formerly in a band called Sophisticated Neumes, Swail formed the core of Fun for Malakaï when he hooked up with former Dreams Go Colour guitarist Ian LeFeuvre. Bassist James Milks and drummer Peter von Althen worked their way into the line-up a couple of years ago, and the young group (everyone is 23) has been winning fans in Ottawa ever since. They’ve also toured around Canada with the likes of Chalk Circle, the Skydiggers, the Waltons, and the Rheostatics, whom Smail particularly likes.

“On our last tour, we played a show at Harpo’s in Victoria with the Rheostatics, and it was a great show. I would say that, right now, they are easily one of the best bands in Canada.”

When Fun for Malakaï plays the Town Pump on Friday and Saturday (June 18 and 19), it will be warming up for a totally different kind of band: San Diego’s Beat Farmers. The normally rowdy Beat Farmer fans will need open minds and ears to appreciate FFM’s atmospheric, multi-textured soundscapes, which favour funky rhythms and lots of shimmering, Edge-like guitar.

“We don’t have any rules that we abide by as far as songwriting goes,” says Swail. “We basically start off with a main idea that has a groove or a natural flow to it, and then we work from that and write a song around it. So each song is really treated as a separate entity, as opposed to having just a standard way of writing a song. We’ve never achieved that, and hopefully we never will. Hopefully, we’ll just develop.”