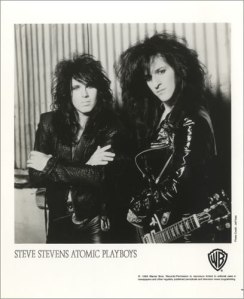 You might have seen the movie Fame–or the TV series that followed it–which traced the exploits of young students at Manhattan’s renowned High School of the Performing Arts. With all the dancing in the streets that went on, you’d figure anyone enrolled in the institution was having the time of his or her life.

Guitarist Steve Stevens was accepted into that school, but he was far from the model student. In act, he couldn’t stand his teachers.

“I learned a lot,” says Stevens, on the line from Toronto recently, “but I learned more from the students than the faculty. I felt that the faculty were largely failed musicians, you know–they didn’t make it, and there was some resentment towards the students.

“But only in the music department,” he adds. “I gotta say that the dance and drama departments were absolutely great. I went to school with Suzanne Vega, who was a dance major. She managed to make it through and graduate; I dropped out because it was so frustrating. Their attitude towards music was a little bit restricting.”

Restrictions of any kind do not sit well with Stevens, the innovative axe grinder who was highly responsible for the success of one blond British bombshell by the name of Billy Idol. Stevens co-wrote all but one song on Idol’s breakthrough Rebel Yell album, as well as handling guitar, keyboards, bass, and programming. With his big head of jet-black hair, Stevens was the perfect foil for Idol, and in concert they were a dynamic force, both visually and aurally.

Now Stevens is on his own, and he’ll be bringing his new band, the Atomic Playboys, to Club Soda this Wednesday (October 11). This time Stevens’ partner is also black-haired: Perry McCarty, who Stevens came across via a demo tape sent in to the office of his record company, Warner Bros.

“I knew that I would be delving into the areas of R&B and some jazzy things on my album,” says Stevens, “so I was looking for somebody who could handle that–as well as being a hard-rock singer. And Perry had had those kind of influences–people like James Brown and Otis Redding and Wilson Pickett.”

With his new main man in tow, Stevens entered the studio with former Idol drummer Thommy Price (since replaced by Greg Gerson) and Mick Jagger keyboardist Phil Ashley to record Steve Stevens Atomic Playboys. The R&B and jazzy areas that Stevens talks about are explored on songs like “Power of Suggestion” and the instrumental “Run Across Desert Sands”, but for the most part the new album is rockin’. As well as hard-hitting originals by Stevens, the disc offers a revamped version of Sweet’s power-pop tune “Action”. 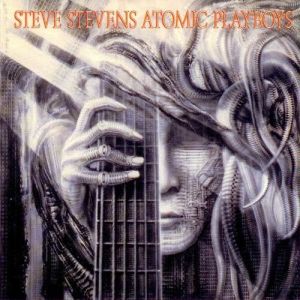 “I really liked that song,” says Stevens, “but I thought it was a Queen song or something. I went to a record store and looked for this song on a Queen record and didn’t see it, so I asked the sales guy and he told me it was by Sweet. And I purely like it; I thought it would be great to do.”

As well as the Sweet tune, Vancouver fans can expect covers of tunes by James Brown (“It’s a Man’s World”), Led Zeppelin (“Communication Breakdown”), and Hendrix (“Fire”). And Stevens is currently contemplating “a really good, classic Deep Purple song” to fit into the Atomic Playboys’ repertoire. (Yours truly suggested “Highway Star”, and Stevens admits that’s the best possibility.) But don’t come to Club Soda expecting any Billy Idol tunes. You won’t get a one.

“Absolutely not,” says Stevens. “I’ve been out of that organization for two-and-a-half years now. I wasn’t particularly happy with the music that was being made anymore, and it was just time to go.”

Only four Stevens co-compositions made it onto the last album he made with Idol, Whiplash Smile. As well as severing musical ties with Billy, Stevens made a clean cut from the Idol organization when he acquired the heavy-duty management skills of Roger Davies, that man who helped make Tina Turner a mega-star.

“I was managed by Bill Aucoin before that,” says Stevens, “who managed Billy and Kiss, but I had a falling out with him. And Roger was the first manager I met that was really great. The first time I sat him down and played him some demos he said, ‘Aw, this is great. It reminds me of the first time I heard King Crimson!’ And I went, ‘King Crimson? What?’ I mean, he’s pretty hip, you know, he’s very cool.”

Another music industry veteran who’s had a strong influence on Stevens lately is famed Van Halen producer Ted Templeman, who gets an executive producer credit on the new album. “Ted was instrumental in keeping my sanity more than anything else,” laughs Stevens. “But he also helped me narrow it down from 25 songs to 13, and helped with a lot of of the lyrical ideas and recording ideas.”

Templeman was also responsible for connecting Stevens with Michael Jackson, who hired the raven-haired rocker to play on “Dirty Diana” and appear on that hit tune’s award-winning video. “I had a great time with him,” says Stevens of Big Mike. “He has a great sense of humour.”

But the favourite bit of session work that Stevens has done so far was on the theme to the hugely popular Tom Cruise flick Top Gun.

“I got to work with Harold Faltermeyer on that, and he’s a very brilliant musician. I learned a lot from him about film scoring. And we actually won a Grammy for it that year.”

A dedicated New Yorker, born and bred in the Big Apple, Stevens says the music scene in his home town is looking very good these days; he expects a lot of N.Y. groups to make it big in the next year or two. “I think the emphasis of the rock and roll thing is gonna shift from Los Angeles to New York in the next two years,” he says. And just which bands should we be watching out for?

“Well, Michael Monroe from Hanoi Rocks–his new group is absolutely great. A good friend of mine, John Sierra, plays guitar in that. And then there’s a band called R.U. Ready which is really good. They’re a bit like Dan Reed Network, actually. Only better.”