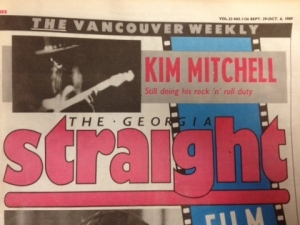 In advance of the show I interviewed him on the phone from his Toronto home, and we talked a bit about the new album, which was gettting a buzz at the time from the raucous single “Rock N Roll Duty”.

But mostly we talked about Max Webster. Man, I loved that band.

Has it really been three years? Well, first of all, I hadn’t planned on taking that long, but I did plan on taking a bit of a break–living some life, getting some inspiration. I’ve watched a lotta artists, big and small, put albums out right after their last one, and it just seemed like a continuation of work.

In your Alert Records bio you say that it’s your most satisfying solo project.

Well, on the heels of a release, every album is a satisfying one–I really mean that. And also: if I hated it, am I gonna say that [laughs]?

But actually, the reality of recording is that you vacillate between many different moods. From total excitement to total boredom to total anxiety to total stepping-out-on-a-limb. There were points during this album where I felt all those.

I see you’ve got Pye Dubois writing all the words again. He’s pretty much your mainstay in the lyric department.

What would you do if Pye weren’t around?

Ummm…well I guess I’d have to do it myself. You know, I’m a Cancer, and not that I’m a cosmic person as far as the zodiac goes, but I have read that Cancers aren’t very poetic, so if I started writing lyrics, I might write some hits, because most hits aren’t very poetic. No, I’m just kidding….

What are the other Max Webster guys doing these days? Do you ever keep in touch with them?

Uh-huh. I’ve been spending some time in my hometown of Sarnia. I went down there and did a bit of pickerel fishing before rehearsals. And [Max Webster drummer] Gary McCracken lives there. He lives in this beautiful little house, and he teaches drums, and he plays some gigs, and he’s basically laying back–he’s quite a fisherman himself. He’s enjoying life–and deservedly so–away from the world of rock and mayhem.

[Max Webster keyboardist] Terry Watkinson has got a degree in medical illustration, so he’s got all these doctors pounding on him to do books and stuff. But he’s also working for an architecture company. And the bass player, Dave Myles, I’ve kind of lost track of. When he quit it was one of those things where his wife went, “You’re coming home and working with my dad–he’s gonna give you a great job.” Now Dave Myles is a big executive running a bunch of big American companies.

So you’re pretty well the only Max Webster member to stick with the recording biz.

Yeah. Actually, my whole career has been kinda like that–leaving people in the dust and stuff. In my early training years, when I moved to the big city to pursue rock ‘n’ roll, the first band I moved here with starved. We all quit school, we moved to Toronto, we all starved, and they all went back and became born-again Christians.

I guess there’s not much chance of a Max Webster reunion.

Naah, who would want it? Other than the fact that I would really, really enjoy to get together with those guys on some spare time, do a bunch of practising, and do a couple of gigs in a bar just for the hell of it. But I know Dave Myles’s personality, and he’d probably be one of those guys who goes, “Well, I want this amount of money.” It wouldn’t be like, “Yeah, let’s get together and have some fun!” ‘Cause I wouldn’t be doin’ it for the money, that’s for sure. I’d be doin’ it because it would be a hoot. Nostalgia is always fun in a person’s life.

Just out of curiosity, what’s your favourite Max Webster album?

Well, there’s certain songs that I like, but generally Max Webster albums remind me of someone you dated when you were growing up, and you see them 10 years later and they’re 600 pounds with teeth missing. I put them on and I can’t listen to them; it’s like a totally different period of my life. Honest to God, I almost go: “Oh shit, no wonder we never made it in America!” Pretty weird.

I always thought that Max Webster was really under-rated, and that you should have sold at least as many records as a band like Loverboy.

Well, thank you very much, but I beg to differ. I think Mike Reno’s got an absolutely amazing voice, you know. He deserves all of what he’s gotten as far as I’m concerned.

What was it that drove you to take up music, anyway?

I don’t know–it was just fun, you know. I was in a band by the time I was 11, and by the time I was 14 I was in a band that was playing original songs. So what drove me to play the guitar? I guess I must have seen something on TV and took interest. You see Elvis, and then you see Jimi Hendrix, and your parents buy you things all the time. I guess one of them was a guitar, and I liked it.

Who are you listening to these days, in your spare time?

I don’t listen to any music. I hate music on my off hours–right now, anyway. It’s like a guy who renovates houses all day. What’s he gonna do, go home and renovate his house? No, he’s gonna go home and kick his feet up. Hold on a second… [At this point in the interview Mitchell had to leave the phone to let his four-year-old son in the house. In the background you can hear the tot showing off a new motorcycle toy to his proud pop. Mitchell also has another son, just one year old.]

Do you enjoy fatherhood?

Oh yeah. The only thing I feel bad about is the world we’re bringing these kids into. I really think–oh look at that, a motorcycle!–I really think there’s some irreparable damage being done to this planet.