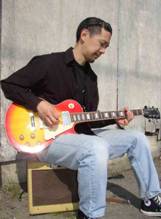 Roland Nipp is nuts about guitar. Even before sampling the local picker’s tasty instrumental CD, The Blue Room, I could tell from scanning his bio that he’s a six-string aficionado. Among those mentioned in his extensive list of influences are such primo players as Joe Satriani, Jimmy Page, Eric Johnson, Larry Carlton, Robben Ford, George Harrison, and Eddie Van Halen.

“A lot of them are virtuosos,” Nipp says, “but a lot of them are not—they’re just great players, I think. Like Jimmy Page and George Harrison, they’re not technicians, per se, but boy, they hit the right note at the right time. For me, anyway.”

Chatting from his home in Richmond, Nipp seems hard-pressed not to mention famous guitarists when talking about his own music. I get an excited laugh from him by asking who, out of all the guitar stars he’s noted, he would most love to jam with. “Well, I have a song on the CD called ‘L.L.P.’,” he points out, “and that stands for Lee, Lifeson, and Peart. I was a huge, huge Rush fan—and still am. I mean, Permanent Waves came out in 1980, when I was in Grade 11 or 12, and they were singin’ songs about ‘the spirit of radio’, and having integrity in the music business. When you’re young and impressionable you think of those ideals as pretty neat to have.”

It’s evident from the multicoloured mix of jazz, blues, and rock stylings on The Blue Room that Nipp has learned well from his musical heroes. One of the most entrancing tunes among the CD’s 11 tracks is “Blues for Carlos”, which makes you wonder why there isn’t a nod to recent Grammy sweeper Santana in Nipp’s press kit.

“The paper isn’t big enough to fit all the guitar players that I admire on there,” he says. “But I actually wrote ‘Blues for Carlos’ two years ago, before Supernatural came out, so it’s kind of coincidental that he’s makin’ headlines again. I love his lyrical, melodic plane. When I hear ‘Samba Pa Ti’, that does it for me.”

Born in Prince George and raised in Burnaby, the 36-year-old Nipp has loved guitars ever since he played his first one, at age 13. His all-time favourite, a wood-grain ’52-reissue Telecaster, is pictured on the back and inside covers of his CD. It’s that “no-frills guitar” he takes with him to Vancouver’s John Oliver Secondary School, where he teaches an introductory course on blues guitar, using the instructional manual he wrote and an accompanying CD he recorded especially for the class.

“How I learned to play was copying off records,” he says, “and hitting Play/Rewind, Play/Rewind on the tape deck. It seemed to work for me, so I thought I should try to put everything together the way I wished somebody had presented it for me.”

Nipp’s course, part of the Vancouver School Board’s continuing-education program, is geared toward people who have been playing for a couple of years, know a few chords, but haven’t yet discovered the pentatonic (blues) scale, or how to bend notes. Nipp bends a lot of them himself, and to great effect, on The Blue Room, but admits that when he was first learning, things didn’t sound so sweet.

“I wasn’t very good at first,” he recalls, “so I paid my dues and made other people suffer who heard me the first few years. But the first time I played I had a real connection to music, more so than TV and movies. I mean, those are fine too, but I really connected with music more. It became kind of a companion, and I got a lot out of it.”

Over the years Nipp has performed in the original-rock bands A.D. 88 and After the Fire, spent time in Toronto in a John Mellencamp tribute band, done a bit of session work, and composed music for film. Written, played, programmed, produced, and recorded at his home, The Blue Room is the guitarist’s first solo CD. Needless to say, the creation of the disc took Nipp on a very personal and solitary journey.

“That was one of the most rewarding things about it,” he says. “Most of the bands I’ve been in before were collaborative—and there’s lots to be said for collaboration—but this was a solo project in the true sense. It was rewarding because I could think of an idea and pursue it till the bitter end, take it down any road it felt like leading me. I had no time limits, no exterior pressures, so it was kinda like a painter trying to do a painting, where when you’re done with it you either like it or you discard it, I guess.”