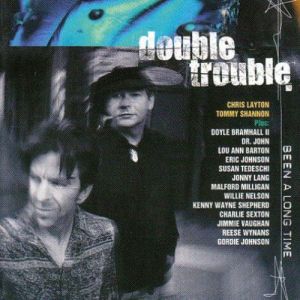 For its debut CD, Been a Long Time, Double Trouble—Stevie Ray Vaughan’s former rhythm section of bassist Tommy Shannon and drummer Chris “Whipper” Layton—assembled some of the most admired blues and rock guitarists around. Eric Johnson, Jonny Lang, Kenny Wayne Shepherd, Doyle Bramhall II, Gordie Johnson, and Vaughan’s older brother Jimmie all lent their talents to the affair. Not surprisingly, as accomplished as those folks are, no one could quite light things up the way SRV used to.

“To be honest,” says Shannon from his home in Austin, Texas, “any guitarist I play with is—heh—not quite the same. I mean, don’t get me wrong, I enjoy playin’ with a lot of people, and I don’t expect them to live up to Stevie. But he did spoil me.”

Shannon and Layton lost their guitarist-vocalist (and best friend) when the helicopter he was in crashed after a concert at Alpine Valley, Wisconsin, on August 27, 1990. Been a Long Time pays tribute to the kind of emotional blues Vaughan played his heart out for that fateful night—and every single time he went on-stage. As well as the topnotch guitarists, an impressive lineup of vocalists took part, including Susan Tedeschi, Willie Nelson, Dr. John, and Lou Ann Barton, the last singer Stevie Ray backed before taking over the mike in Double Trouble.

In Vaughan’s memory, Been a Long Time concludes with a roughly recorded, 30-second snippet of him playing on a tune called “Chateau Strut”. Other than that, there are no Vaughan songs on the CD, and Shannon says there won’t be any performed when Double Trouble plays the Commodore Ballroom on Saturday (July 7). “We didn’t feel like that’d be the right thing to do,” he relates, “because people would start comparin’ it with Stevie, and it would be a letdown, you know, ’cause there’s only one Stevie.”

After performing on Johnny Winter’s first three albums—and appearing with the albino bluesman at Woodstock—Shannon hooked up with a 15-year-old Vaughan in Austin. He played with him for a few months in ’72 in the rock band Krackerjack, and then in ’81 took his revered place beside Layton in Vaughan’s influential trio, Double Trouble. Two years later that lineup took the world by storm when its Texas Flood proved once and for all that blues could be a potent commercial force.

During their time as Vaughan’s rhythm section, Shannon and Layton were rarely credited for songwriting—the 1989 hit “Crossfire” being an exception—but for Been a Long Time, they wrote or cowrote half the material. “That was the main inspiration for doin’ this record,” Shannon points out. “If we were gonna do a record at all, we wanted to do one in which we had a lot to do with the creativity on it, and not just bring in people and play a bunch of blues songs. There wouldn’t have been anything special about that.”

When Double Trouble hits town, they’ll be accompanied by vocalist Malford Milligan, vocalist-guitarist Tina Schleiske, and guitarists Billy Cassis and Mike Ingles. And there’s always the chance that openers Tony D and David Gogo—the latter a onetime protegé of Stevie Ray’s—might wander back on-stage for a jam. Whatever happens, you can rest assured that the drum ’n’ bass action will be as steady as it comes. Shannon, who names studio ace Willie Weeks as his all-time favourite bassist, is asked what he feels is his own greatest skill on the four-string.

“Oh, man, that’s a hard question,” he says. “Mmm… I think the fact that I’ve stuck with it for so long, for one thing. And I love music so deeply—I hope that comes through in my playing. But I’m what I think of as a simple bass player; I don’t get real complicated, and I try to play more with the groove. Because when you find the groove in that pocket, there’s nothin’ as much fun as that.”