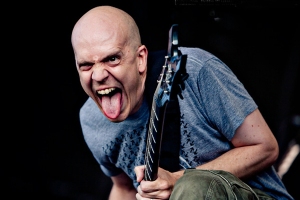 Devin Townsend is always fun to follow on Twitter. You never know what the Vancouver metal maestro will come up with in his daily musings. But you can always rely on a serious lack of bullshit.

Yesterday Townsend caught my eye with a few tweets about some of his favourite guitarists-who also happen to be some of mine. He started things off by drawing attention to shredder Tony MacAlpine.

“As far as guitar albums from the 80s I played this one constantly,” Hevy Devy tweeted, including a YouTube link to Tony MacAlpine’s 1987 Maximum Security album.

“It was his melodic sense for me,” related Townsend in his followup tweet, “it was fast, but the melodies were really engaging compared to the rest of the scene…painted pictures.”

Then Devy went on to name more names.

Nice. He put some focus on Steve Morse, who’s currently with Deep Purple but has been blowing folks away since the mid-70s with his work with Dixie Dregs.

For his final tweet on guitar heroes (for now at least) Townsend included a link to Morse’s “Golden Quest”, a tune from the Steve Morse Band’s 1985 Stand Up album.

I’d forgotten how great that tune was myself so, Devin, wherever you are: thanks for the reminder!