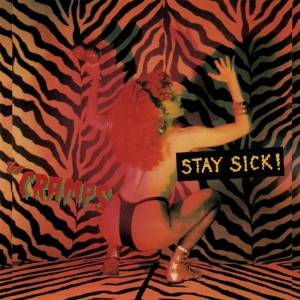 On April 12, 1990–the Cramps played the Commodore Ballroom in Vancouver.

Oh man, what a show that was.

In advance of the gig I was fortunate enough to interview Cramps guitarist Poison Ivy–aka Ivy Rorschach–and that was a trip as well.

Here’s the story that appeared in the Georgia Straight newspaper under the headline Cramps Make Music for Misfits.

Legend has it that B-movie mogul Samuel Z. Arkoff took an ass-backwards (but ultimately effective) approach to producing his low-budget films. First off he’d come up with a catchy title; then he’d build an advertising campaign around that title; and only then would he start shooting the actual film.

Cramps guitarist Poison Ivy and singer Lux Interior take a similar approach on many of their tunes, but you can’t really blame ’em. I mean, if you thought of a classic song title like “The Creature From the Black Leather Lagoon”, wouldn’t you want a tune to go with it?

“That was a title that we almost used on our last album,” says Ivy, “but we didn’t have the words for it. And another song, “All Women Are Bad”, is the name of a movie that we have a poster of. And sometimes we slide movie titles into songs. On “Mama Oo Pow Pow” it mentions Scream of the Butterfly, which is the title of an exploitation movie.”

Low-budget B-movies and cult-horror films are important points of reference for the Cramps, and reflect the band’s style of music–a mutant strain of rockabilly that is the embodiment of all things trashy. Tunes like “Human Fly”, “Goo Goo Muck”, and “I Ain’t Nothin’ but a Gorehound” are the type of songs that Ivy and Interior come up with after watching twisted flicks in the comfort of their Spanish-style Hollywood home, conveniently located right next to a graveyard.

“We’ve been so busy doin’ band stuff that we haven’t seen a lot of movies lately,” instructs Ivy, “but we do collect a lot of movies–we’ve got like 3,000 on videotape. Of the few ones I’ve seen lately I’ve liked Blue Velvet, and The Fly, and Evil Dead 2. But Lux and I aren’t really into all the fancy special effects; we prefer the older horror movies.”

Anyone with a real interest in junk movies might have figured that the Cramps’ latest single/video, “Bikini Girls with Machine Guns”, had been inspired by Ted V. Mikels’ no-budget gutter epicThe Doll Squad, or maybe Russ Meyers’ Faster, Pussycat! Kill! Kill!. No such luck.

“It was mainly inspired by a videotape we saw in this survivalist catalogue,” says Ivy. “In between the stuff about how to clean your gun and how to make bombs at home was a video about ‘Sexy Girls with Sexy Guns’. We got it, and it’s just these girls out in the middle of the desert in bikinis, just blastin’ off major artillery, chewin’ up the sand, and bouncin’ all over. And it was just a powerful image–sexy and strong.”

Ivy herself adopts that image in the video for “Bikini Girls”, bouncing around in a skimpy two-piece while brandishing a not-so-skimpy weapon. But Ivy–who also graces the cover of the new Cramps LP, Stay Sick–is much more than a machine-gun-toting sex goddess. She’s also a rockin’ guitarist. Ivy cites her biggest musical influences as people like Link Wray, Ike Turner, Hubert Sumlin, and the Ventures, but says there are few players around today that really impress her.

“There’s kind of a scarcity of guitar players, at least any that have a primitive, strong style. That’s what I like–I’m not impressed by speed or technique. I like somebody that’s got just a really frightening, violent style.”

Today’s music scene in general doesn’t get Ivy too hopped up, either.

“I think rock ‘n’ roll’s been in bad shape throughout the ’80s,” she says. “I’m hopin’ that the ’90s will just kick everybody in the ass. I think what passes for rock ‘n’ roll isn’t, and it’s alarming how many people respond to mechanical kinda dance music that’s not very sensuous or human sounding.”

One band that is in Ivy’s good books these days is the B-52’s, another mixed-gender group that finds inspiration in the various facets of junk culture–although in a milder, more mainstream vein than the Cramps.

“I think it’s great, the success they’re having. We saw them at Max’s Kansas City, the first show they ever did in New York in…God, I don’t know, it might have been late ’78. And they started out as a pretty raw rock ‘n’ roll band. I prefer ’em as that, but they still seem like kind of charismatic people to me.”

And what about the Cramps’ success so far? Ivy’s fairly happy with the way things have gone for the most demented band in the land.

“I’m satisfied in a way,” she says. “I mean I’m happy that we’re able to do this and not do something else for a living. We probably wouldn’t be able to do anything else; we’d probably be in the nuthouse.

“But I would welcome even larger success,” she adds. “I think what the Cramps do can appeal to large amounts of people. Not everybody–it’s definitely not easy-listening music–but I think there’s a lot of misfits out in the world. If one percent of the population likes us, that’s a lot of people.”