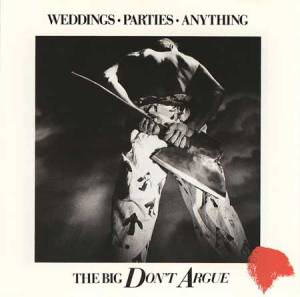 Halifax, Nova Scotia: Could those three words possibly conjure up images of a city full of alluring possibilities and untold enchantment? Well, when Mick Thomas of Australia’s Weddings, Parties, Anything first heard them, his imagination was piqued, and he couldn’t wait to see what the city was really like. Maybe even write a tune about it.

“It was just the first time we’d come overseas,” says Thomas. “I got my itinerary, and I sort of knew it by reading about most of the places on it. But there was this place—Halifax, Nova Scotia—and all these exotic images entered my head about what it would be like.

“But you get there and it’s a city where people live and go to work and earn their money and come home and have a few beers and go to a nightclub on a Saturday night. So ‘Knockbacks in Halifax’ is just a song about goin’ 10,000 miles to do exactly what you do at home!”

“Knockbacks” is just one of many classy tracks on WPA’s new album, The Big Don’t Argue, and chances are good that pub-rock fans crammed into the Commodore this Friday (June 22) will get to hear it live, along with other beer-swilling numbers from past albums like Roaring Days and No Show Without Punch.

When Thomas told the Georgia Straight about his short-lived Maritime fantasy, he was calling from the not-so-exotically named Winnipeg, preparing for the second night of a double-header there. He says flatland folk seem to take a liking to his band. “I don’t know whether it’s the accordion, or the sort of polka element that the band’s got, but the Prairies just seem to be a natural for us. Like last year we did really big in Calgary, and we’ve done pretty well in Edmonton and Regina, too. And the way tickets are sellin’ for the Commodore this time around, the promoter reckons it could be a sell-out in Vancouver. It’s like, ‘Wow!’ ”

The band’s chief songwriter and vocalist, Thomas grew up in the industrial town of Geelong, in the Aussie province of Victoria. He says that his musical background was one of mixed styles and much moving between them.

“I was one of those stupid kids who always had aspirations to be different from the other kids. So when I was around 13 or 14, in my first high school bands, I was really into R&B. Then later on when everyone was getting into rock ’n’ roll and the ’50s revival thing was big, I went ‘No way’ and just got into folk music, via blues and country. I played in a few bush bands, but found that a little stifling as a writer, ’cause bush bands tend to have to play jigs and reels and old traditional songs, and I knew pretty early on that I wanted to write. So I just had to get me own band together, and it just gradually evolved into what you see today.”

Geelong didn’t have nearly as rich a musical scene as the two main outposts of Aussie rock, Melbourne and Sydney, but Thomas says that, as a kid, he got to see a lot of bands there.

“Oh, AC/DC used to come down and play the pub! And a band called Cold Chisel—they were my favourite; I loved Jimmy Barnes. Midnight Oil when they were just a smallish band. And Radio Birdman, who were an incredibly influential band in Australia. The repercussions of what they did are still being felt. I just remember being quite frightened by what they did—they had like an MC5, Detroit punk attitude. It was like, ‘Oh shit, what is this?’ ”

But the only punk band that really mattered had an even bigger effect on Thomas. As a matter of fact, Weddings, Parties, Anything took its name from a line in the Clash’s “Revolution Rock”, off London Calling.

“I really liked the Clash,” says Thomas. “But I don’t like their imitators so much. It’s very much a boy’s-own thing with the Clash—they were very much a dashing, guns-guts-and-glory sort of band. And I like that, too, but more than that what I like is the stuff on London Calling and Sandinista—and even back as early as the first album when they did ‘Police and Thieves’—when they were taking roots elements from R&B and reggae and ska and doing something different with them.

“And I think that’s really important to what we do; that we take things, but we’re not too precious about what we do with them. I mean we’re respectful, but we’re not precious and pure—that’s something we’ve never known about, or wanted to know about.”

When Thomas’s vision of Weddings, Parties, Anything finally came together in ’85, the band found that it was too rock-oriented for the folkies and too folky for the rockers. But it did find a home at the Jika-Jika Hotel in the inner-Melbourne suburb of Fitzroy, where the band members lived. The really tough part came when they had to leave town.

“You can stay in the inner city and play to your big crowds, but in Australia longevity means getting to the suburbs, and that starts gettin’ rough. When we first started pushing out there it was a real nightmare because no one knew us, and we didn’t have a very big P.A. And if there’s one thing Australian audiences really live by it’s these fire-breathing P.A. systems. We’re out there with these little dinky P.A.s, and I remember nights when…I don’t know…all you could do was go and get drunk after the show.”

WPA’s nose-to-the-grindstone approach paid off in ’87, when WEA Australia stepped in and signed them up. Shortly after the release of its first album, Scorn of the Women, the band walked away with that year’s Aria Award (an equivalent of the Juno) for best new talent.

For the new album, the band went to Memphis to work with producer James Luther Dickinson, who had previously recorded such acts as the Replacements, Ry Cooder, Toots Hibbert, and the Cramps. A couple of Dickinson’s acquaintances, the irrepressible Mojo Nixon and Skid Roper, just happened to stop by while the tapes were rolling.

“They were just in town, and Jim had worked with them on their last album. We went down to see ’em, and we were just blown out by them—they’re such nice guys. They came to the studio, and the Georgia Satellites were in the next room, so they were doin’ a water-bomb fight with them and just hangin’ around. We needed a whistling solo on one song, and none of us could whistle, so we got Skid to do it. And then we needed some raucous, all-over-the place vocals, and Mojo was certainly the man for that.”

As well as enjoying the wild company of folks like Nixon and Roper, Thomas shared the stage with the more sedate Bono when Weddings was chosen to support U2 for its entire Australian tour of last year. Bono gave Thomas a great compliment—and really hit on the universal appeal of Thomas’s band—when he told the Daily Telegraph:, “[Thomas] writes songs that old men can sing in pubs and that kids can dance to. We’ve been trying to do that for years.”

“I’ve had a lot of friends in other bands come to our gigs,” relates Thomas, “and they go, ‘Christ, there’s a lot of people with beards in your crowds,’ or ‘There’s a lot of hippies,’ or ‘There’s a lot of kids.’ But I’m not youth-obsessed, you know, and I just find a lot of music terribly snotty in its youthful efforts. I’ve just turned 30, and I don’t really give a stuff—I still want to be makin’ music when I’m 50. And I don’t want some little prick saying, ‘Oh you’re too old, outta the way grand-dad,’ ’cause I can mix it with any 18-year-old, you know. I mean if they want to try and give me any strife, they’d better look out.”