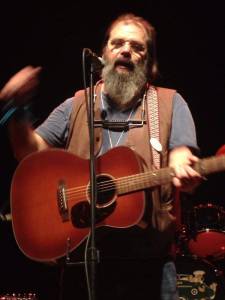 photos by the Newt

Steve Earle was his typically cool and collected self during his marathon set at Hard Rock Casino Vancouver last night, but there was one moment when his calm demeanour got left backstage.

Just before his encore one overly enthusiastic fan scampered up on the empty stage to grab a setlist taped to the floor, messing with some of the gear when a bouncer tried to grab him. Earle returned to the stage just in time to see the shit go down.

“You’re an asshole!,” he hollered, pointing at the guy as security escorted him away. “You broke the microphone!” he complained before commenting that some people drink too much, and that they just give away those setlists after a show if you ask for them.

Damaged mic or not, Earle continued on with one of my all-time fave tunes of his, “I Ain’t Ever Satisfied”, off the 1987 Exit 0 album.

Nearly two hours before that the Texas troubadour had taken the stage with a killer band that included guitarist Chris Masterson and fiddler Eleanor Whitmore, who’d opened the show as alt-country duo the Mastersons. Supremely nerdish looking, Masterson would nevertheless prove a formidable twang-master throughout, and Whitmore was equally impressive on her instrument–and vocals, too, when she joined Earle on the duet “Baby’s Just As Mean As Me”, from his new blues album, Terraplane.

Never one to let his political leanings go unheard, Earle’s last words to the crowd included a timely jab at Stephen Harper: “Don’t forget to be Canadian, and watch this right-wing government you got.”

I was so impressed by Earle’s show that I broke down and bought a Copperhead Road t-shirt, then went back and said a quick “howdy” to the man after the gig.

We haven’t changed a bit since that last photo-op, have we?