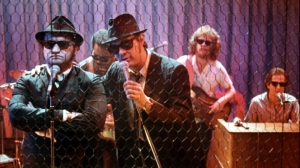 Back in 1985 Eric Clapton played a show in Vancouver, but he wasn’t doing any interviews with the likes of me.

I was happy as hell just to chat with bass-guitar legend Donald “Duck” Dunn, who you may recall for his work with Booker T & the MG’s.

During the course of our interview I asked him when he first heard Clapton–who he calls “the best all around guitarist I’ve ever worked with”–and we wound up talking about Duck’s work on the Blues Brothers album and movie.

Turns out he was pretty good buds with John Belushi, who he affectionately refers to as “the Godfather”.

To hear my full 1985 interview with “Duck” Dunn become a patron of the Newt on Patreon.