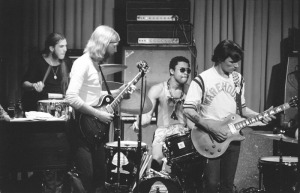 If you think I got into journalism at the age of 23–first at my hometown’s Chilliwack Progress and then, for the last 34 years, at Vancouver’s Georgia Straight–mainly so I could interview guitar heroes like Dickey Betts, you’re damn rights.

I’ve loved Dickey ever since I heard him and Duane on Eat a Peach at the age of 16 or so.

I’ve managed to interview Betts four times so far–in 1989 when he was leading the Dickey Betts Band, in 1991 and ’92 when he was back with the Allman Brothers, and in 2001 when “a dirty little business deal” got him kicked out.

Near the end of the second interview I was feeling kinda sentimental, so asked him what song he thought Duane Allman and the boys from Skynyrd might be jamming to up in heaven.

He audibly shrugged “I don’t know” three times before finally coming up with an answer.

If you enjoy these type of stories, like Ear of Newt on Facebook and join my new group, Newt’s Flaming Colossal Rockatorium.