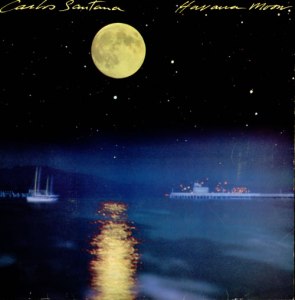 The Fabulous Thunderbirds, the Tower of Power horns, Booker T. Jones, Willie Nelson. All fine artists, but what do they have in common? The new Carlos Santana album, that’s what.

Guitarist Jimmie Vaughan, drummer Fran Christina, bassist Keith Ferguson, and harmonica man Kim Wilson–the Fabulous Thunderbirds–play on five of Havana Moon‘s eleven songs. The guitar interplay between Santana and Vaughan on the instrumentals “Lightnin'” and “Mudbone”–tributes to blues greats Lightnin’ Hopkins and John Lee Hooker–is delicate and inspired. The two play so naturally together that one wonders if fate didn’t play some part in their eventual jamming.

The Tower of Power horns perform on only one track of Havana Moon, the opening cut “Watch Your Step”, but their powerful brass arrangements add much to the song in way of dynamics. Closely resembling Sonny Boy Williamson’s “One Way Out” in structure and feel, “Watch Your Step” benefits from a strong vocal performance by Greg Walker. His soul singing on “Daughter of the Night” makes that song a standout as well–my favourite vocal track on the album, which includes five instrumentals.

Booker T. Jones plays keyboards on six tunes, sings lead on his own new number “One With You” and Chuck Berry’s “Havana Moon”, and country great Willie Nelson puts his warbly vocal cords to good use on “They All Went to Mexico”.

Through much more middle-of-the-road and much less explosive than Santana’s previous solo albums Swing of Delight and Oneness, Havana Moon is an attractive collection of songs played with fine musicianship. And inimitable Santana spirit shines throughout.