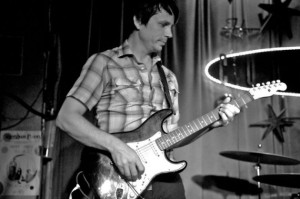 On the cover of his self-titled 1993 debut CD, Ian Moore is pictured perched on a Fender amp, his arms folded over a Stratocaster, wearing jeans with cuffs turned up over well-worn cowboy boots. It’s the archetypical image of the Texas Strat-slinger, and with his straight long hair hanging across his boyish face the guy could easily be mistaken for Kenny Wayne Shepherd.

That misrepresentation as a blues-rocker—encouraged by his label at the time, Capricorn—has been a bone of contention for Moore, but over the course of his career the Austin native’s music has become increasingly diverse, distancing him more and more from the persona of a Stevie Ray Vaughan wannabe. Still, that doesn’t mean he wouldn’t slam on the brakes at the nearest roadhouse blasting out the hard-driving blues his hometown’s known for.

“First of all, let me clarify,” states Moore, on the line from Vashon Island, the picturesque community near Seattle that has been his residence for many years. “I’m a huge fan of Stevie Ray Vaughan. I love that style of music and have all the respect in the world for it. But what was important to me—and what Stevie encouraged me to do when I was very young—was to make sure to have my own voice and to not be swept away in other people’s perceptions of what I should do.”

One need look no further than Moore’s sixth and latest studio album, To Be Loved, for proof that he’s taken Vaughan’s advice to heart. Though thoroughly rooted in the pop realm, it’s an ambitious and, at times, complex outing. And from the eclectic title track—which opens the CD with flourishes of strident ’70s glam rock, yet also incorporates the otherworldly vibrations of the musical saw—right on through to the dreamy psychedelia of closer “Wait for the Sun”, you won’t hear a single slide lick or bent blues note.

“My general take on music and the way I approach it is very in line with my predecessors,” notes Moore, “even people like Joe Ely and especially Doug Sahm, who’s probably one of my favourite musicians of all time. So continually travelling through music and revisiting myself from different angles is a really big part of what I stand for and what inspired me in music.”

Breezy power-pop tracks like “30 Days”, “Killing Joke”, and the Beatles-esque “House Up on the Hill” show Moore to be a fount of melodic hooks. Another catchy standout, “Literary Kind”, has its origins in a North American tour he undertook two years ago with Paul Weller.

“He has been a big influence of mine for obvious reasons,” says Moore of the former Jam man. “He’s such a huge fan of soul music and American blues and roots music, but very, very modern in the music that he’s made on his own. And after doing that [tour] it kind of cast me back through the whole collection of all the Stiff Records stuff, the Wreckless Eric and the Elvis Costello and the Nick Lowe. So ‘Literary Kind’ is pretty indebted to that.”

When he plays Vancouver, Moore will share the bill (and a rhythm section) with Spiral Stairs, “a really hip cat” also known as former Pavement guitarist Scott Kannberg. “From what I’m hearing he’s really into, like, Lee Hazlewood and a bunch of that crazy stuff,” enthuses Moore. “He’s a really, really interesting guy and a very interesting guitar player.”

That makes two of them.