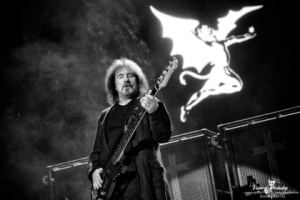 Apart from the ominous tone of its name—and the fierceness of its music—Black Sabbath as a band hasn’t been known as the rowdiest of legendary rock acts.

When I interviewed guitarist Tony Iommi way back in 1984 he seemed like the perfect gentleman on the phone.

And despite his “let’s-go-fucking-crazy!” approach to life in general, singer Ozzy Osbourne, likewise, comes across as a pussycat in conversation.

The reputation of Sabbath as typical rock ‘n’ roll wildmen got a boost yesterday, though, when it was learned that bassist Geezer Butler had spent Tuesday night in jail after an altercation in a bar in Death Valley (yikes!), California.

The 65-year-old was arrested after a fight at a place called the Corkscrew Saloon and charged with misdemeanour assault, public intoxication, and vandalism.

Here’s what the cops had to say in a statement:

“Shortly after midnight on January 27th, sheriff’s dispatch received a call regarding a verbal and physical altercation that took place at the Corkscrew Saloon located at the Furnace Creek Ranch property in Death Valley national park.

“After the Inyo County sheriff’s deputy arrived on scene and interviewed witnesses, it was determined that there had been an argument that escalated into a physical confrontation — resulting in an individual being struck, and a broken window.

“Terence Michael Butler, a 65-year old man from Beverly Hills, California, was arrested for misdemeanor assault, public intoxication and vandalism. Butler was booked into the Inyo County jail and released after detox and citation.” 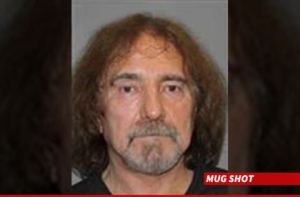 Here’s Butler’s mug shot via TMZ. He doesn’t look all that wasted to us. Maybe he was drinking American beer.