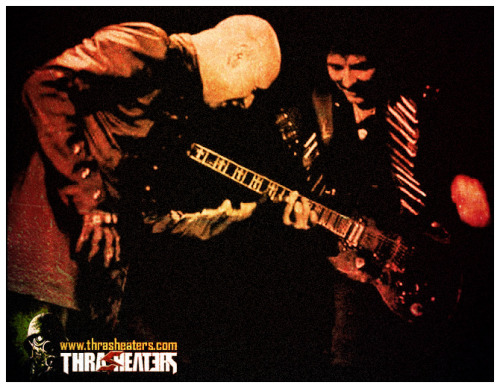 I was interviewing Rob Halford yesterday in advance of Judas Priest’s two shows at the Hard Rock Casino Vancouver this month and, as old-school rockheads will do, we got to talkin’ Sabbath.

I’d known that Halford had sang with the metal legends three times–twice covering for Ronnie James Dio, and once for Ozzy Osbourne–but was curious as to which Sabbath tune he’d most enjoying performing with them.

“Ooo, that’s a good question,” he replied. “Um, I’d probably say the actual song ‘Black Sabbath’, which is, to me, the most evil song that’s ever been written [laughs]. It’s very fucking scary! There’s something very malevolent about that song. It’s just the whole–it’s the way it starts, and then it’s almost deathly quiet, and then that opening line: ‘What is this I see before me?’

“You know, I just get goosebumps thinking about it now. And when I sang that song live, it makes you feel really…wow…I can’t describe it. It’s just very overwhelming, the emotion is very overwhelming.

“And when you see Ozzy singing it you can see him change, you know, his whole demeanour, he just changes as a person to sing that song. It’s really spooky.”

I also asked Halford about Priest’s recent habit of using “War Pigs” as its walk-on music before gigs.

“Yeah, that’s kind of a nod to these boys that we’ve known from day one,” he explained. “We’re from the same neck of the woods, and there’s a very strong friendship that still exists with us all. And it’s kind of a rallying cry, really. Even our fans know now that when they hear that song it’s almost time for Priest to hit the stage.