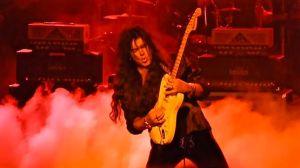 When I interviewed guitar hero Tosin Abasi before the Animals as Leaders concert in Vancouver last month, I asked him a few questions about the pickers he’d performed with earlier this year on the Generation Axe tour.

As well as Steve Vai, Zakk Wylde, and Nuno Bettencourt, Abasi was in the company of the legendary Yngwie Malmsteen, part of whose legend includes reports that he’s totally conceited and full of himself.

But when I asked Abasi if the rumours of Malmsteen being a “pompous ass” were true or not, he came to the Swedish speed-demon’s defense.