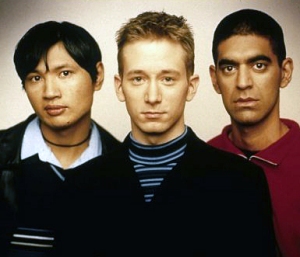 ORIGINALLY PUBLISHED IN THE GEORGIA STRAIGHT, MAY 29, 1997

When it came time to record his band’s major-label debut last year, Wide Mouth Mason singer-guitarist Shaun Verreault took the old adage “Go west, young man” to heart. With bassist Earl Pereira and drummer Safwan Javed in tow, Verreault left the flatlands of Saskatoon and made the trek out to Vancouver. But it wasn’t the scenic lure of the mountains and ocean that drew the youthful blues-rockers (average age 22) this way; they came because Joel Van Dyke—who mixed the band’s indie release, The Nazarene—lives here, and they wanted to utilize his “extra set of ears” once more. So Van Dyke took the trio into Burnaby’s Greenhouse Studios, where his prairie pals enjoyed the royal treatment from the owners of the place.

“Roger and Bruce Levens, the guys who run it, were really good to us the whole time,” enthuses Verreault, cradling a coffee in Kitsilano’s Café Sport. “They gave us a really good deal, and let us stay there while we were recording. And for the amount of money we spent on it, the calibre of the place was really up there.”

The western hospitality shown to Wide Mouth Mason included musical assistance from local keyboardists Mike Kalanj and Mike Weaver, and Colin James—who himself was once a fresh-faced Saskatchewan blues-rocker, shaking the prairie dust off in Vancouver—handled Dobro on one track. Although WMM had been signed by Warner Music Canada before entering Greenhouse, it didn’t go in with mounds of corporate cash to blow on recording, but, like Verreault says, it got its money’s worth with Van Dyke at the helm.

“Joel did a lotta things, and not just musically,” he says. “He knew when to push us in the studio, and when to take us to play Frisbee and forget about music. He also knew when to go, ‘Okay, this part of the song never did anything for me. Explain to me why it’s there.’ ”

Since the Canada-wide release of Wide Mouth Mason last March, the band has toured constantly, with its current itinerary including an opening spot for ZZ Top on Sunday (June 1) at General Motors Place. The trio previously acquainted itself with Vancouver’s blues-rock community as warm-up on Big Sugar’s 1996 Canadian tour.

“That was a great tour for us,” says Verreault, “because most of the places we went with them we were absolute nobodies, and then all of a sudden there we were, in front of a sold-out house. Plus it was good for us to watch a band at sort of the next level, and see how they conducted things.”

Wide Mouth Mason’s rise from prairie bar band to major-label touring act—a U.S. release on the heavyweight Atlantic Records is set for July—was bolstered when the band came to the attention of Warner Music Canada’s head of A&R at last year’s Music West conference. But Verreault doesn’t think bands should put too much stock in the make-or-break potential of such industry events.

“We had played at one of those things before,” he points out, “and I was pretty unimpressed with how a lot of the delegates were more interested in drinking and playing pool than watching the bands. Some of the bands had driven like two days and paid to get into it, and nobody paid any attention to them.

“So I think it’s better to work your butt off and play live as much as you can,” he adds, “to see if you can get a buzz happening first. Then, get good management.”