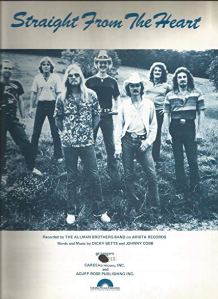 Hey, as you may be aware, I never tire of posting little audio snippets from my four interviews with guitar legend Dickey Betts.

Here’s one from 2001 where Dickey, always honest and to the point, explains how the Allman Brothers broke up in the early ’80s to let disco run its course–but not before being talked into making some music that was pretty hard to stomach as well.

To hear the complete 2001 interview with Dickey, become a patron of the Newt on Patreon.