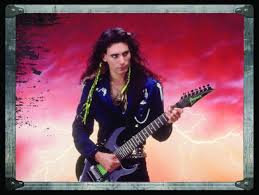 I did my first interview with Steve Vai when he was touring with Whitesnake in May of 1990, but I was more interested in talking about his brand-new solo album, Passion and Warfare.

I was particularly blown away by the track “For the Love of God”, which still stands up as one of the finest guitar showcases of all time, I reckon.

At one point in the interview I asked him what his personal fave tune was on the album, and wasn’t surprised at all by the response.

To hear my full 23-minute interview with Steve Vai subscribe to my Patreon page, where you can while away the hours of COVID-19 self-isolating taking in my conversations with:

…with hundreds more to come