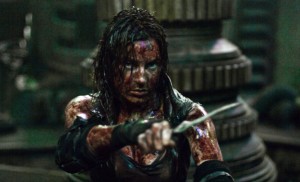 The two movies that I remember scaring me the most as a little kid were The Wizard of Oz—that Wicked Witch of the West really had my number—and It! The Terror From Beyond Space, a low-budget 1950s sci-fi flick, a precursor to Alien, about a monster that gets on board a spaceship and starts systematically offing the crew. I remember being petrified by the sight of a victim’s body being discovered in a ventilation shaft.

I vowed right then that if I ever got on a spaceship, I would stay the hell out of those shafts.

The characters in Pandorum clearly haven’t seen It!, because they can barely wait to get into a ventilation shaft. Shortly after coming out of extended hypersleep in the year 2174, astronaut Cpl. Bower (Ben Foster)—with the similarly revived Lt. Payton (Dennis Quaid) tracking his progress—heads into the bowels of their enormous spacecraft, seeking access to another level.

At this point, director Christian Alvart does a keen job of portraying the claustrophobic experience as Bower crawls about in the confining darkness, his struggle recalling scenes in The Descent where trapped cave explorers are forced to squeeze their way through tiny spaces. Strangely enough, the bone-white, shreiking, cannibalistic humanoid creatures from that awesome 2005 shocker are strikingly similar to the things that try to chase down and chomp on Bower and others in Pandorum

Things start to get a tad too Hollywood when hard-bodied Euro chick Nadia (Antje Traue) shows up in full Lara Croft: Tomb Raider mode, leaping around and kicking butt of man and monster alike. Thrilling at first, the repeated sight of vicious beings scurrying after crew members in herky-jerky fast motion gets tiresome after a while, as does the psychological interplay between Payton and the sinister Gallo (nasty Twilight vampire Cam Gigandet).

But even though it’s a disappointment overall, Pandorum’s stunning production design—on a par with the underrated Event Horizon—should satiate sci-fi freaks, while long-suffering horror fans will welcome any respite from juvenile junk like Jennifer’s Body and The House on Sorority Row.