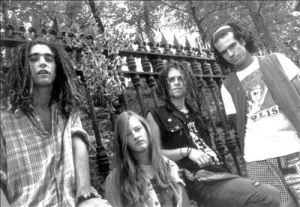 When Doughboys singer-guitarist John Kastner rings up and informs me that he’s calling from Kingston, Ontario, I casually comment, “Oh, the home of the Tragically Hip.” I suppose I could have said, “Hey, nice penitentiary they’ve got there.”

“You know what?” replies Kastner. “I did another interview today and the writer said the same fuckin’ thing to me—‘Home of the Hip’. Poor Kingstonites. If that’s all they’re known for, it’s kinda sad. Damn.”

Before I slam the phone down on Kastner’s ear for not appreciating Canada’s best band—or at least the one that’s up there tied with Rush—he redeems himself somewhat and admits the Hip are “alright” after all. “I wouldn’t say I go home and put on their records,” he hedges, “but, I mean, they don’t bug me. And I do respect them a great amount.”

It sounds as though Kastner respects Kingston’s finest less for their music than for the success they have acquired in Canada, which is something that his band has been working at for the same nine years as the Hip. The Doughboys won some of that recognition when their 1993 album, Crush, went gold here; now the band is pushing its latest release, Turn Me On, and new member Wiz, formerly of British group Mega City Four. He replaced eight-year Doughboy veteran Jonathan Cummins, who left the band earlier this year.

“He hated the fans that came to our shows and he didn’t really like the music,” says Kastner when asked about Cummins’s departure. “And the fact was that me and Wiz had been writing songs for years.” They wrote the breakthrough single “Shine” and “Fix Me” together; they also wrote “Lucky” and “It Can All Be Taken Away” on the new record. “We were just jelling better, and Jonathan was havin’ a really bad time, so we just switched.

“The thing about Jonathan was that he was really cynical and really sarcastic,” adds Kastner, “and it just made it hard to be excited about anything, and the fact is we’ve got a real lot to be excited about. We travel around the world for years on end, and we draw fans everywhere we go, and it’s just awesome.”

Before Cummins left the Doughboys—for whatever reason—he played guitar on and helped write Turn Me On with Kastner, bassist Peter Arsenault, and drummer Paul Newman. They recorded it in two parts with two producers, Ted Nicely (Tripping Daisy) and Daniel Rey (the Ramones).

“We recorded a whole record in New York with Ted Nicely,” says Kastner, “but we just thought we needed a few more songs. And Daniel Rey’s one of my best friends, so we just called him up, wrote a bunch of songs, and went and recorded ’em. We blended [the songs from both sessions] together, and it’s just amazing.

“Making a record is hard,” he adds, “because you don’t want to make the same 12 songs, you know what I mean? You want it to have a vibe and be consistent, but yet not all be the same. And doing it in two different shots with two different producers really made for a lot of variety.”

Kastner and his mates will be bringing those new power-pop punk tunes from their fifth full-length CD to the Town Pump on Saturday (September 21), in the first show of a five-week Canadian tour with A&M label mates Therapy?.

“Therapy? are like best friends of the Doughboys,” claims Kastner. “We toured Europe with them for a month last year, and it was just fuckin’ awesome, so we’re returning the favour by letting them open for us all across Canada.”

Considering the international popularity of Therapy?, it’s more like a double bill, actually. And it’s hard to know which band will draw more fans, since the Doughboys were recently in town as part of Foxfest.

“We just flew out for the one show, and that was okay,” says Kastner. “It was with bands that we’re not really used to playing with, let’s say, but it was still fun, and CFOX has been supersupportive with our new record. As far as all of Canada goes, Vancouver’s always been one of our hardest markets to draw people in, and so with CFOX on it, and doing a thing in the Georgia Straight, man, who knows?

“We’ve been on the cover of every city paper in Canada,” he boasts, “but we’ve never, ever been in the Georgia Straight before. So I gotta tell you, when I saw that I was doin’ the Georgia Straight today, it freaked me out, man. I was really happy. We could never understand why they hated us!”

Maybe I should mention that, at the last minute, Kastner pushed the Straight’s scheduled interview back an hour later than the agreed-upon time, and then was half an hour late calling for that newly set-up one. You’d think a guy with so many best friends would be a little more considerate.