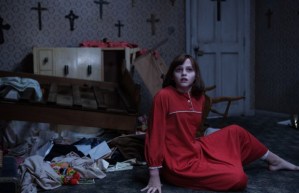 My biggest beef with The Conjuring 2 isn’t that it’s an overbaked and predictable possessed-kid-in-a-haunted-house flick. Or that it’s one of those “based on a true story” projects that you just know is all fiction. The worst thing about it by far is its running time. Why in Satan’s name did they have to make it so goddamned long!

At 134 minutes, TC2 is an excruciating ordeal for discriminating horror fans–or anyone who understands that life is short. Then again, director James Wan is skilled at making people suffer, having kickstarted the torture-porn craze with Saw.

Married paranormal-investigators Ed and Lorraine Warren (Patrick Wilson and Vera Farmiga) return from Wan’s The Conjuring, which was much better but still no screaming hell–despite raking in huge box-office. This time around the demon-wrasslin’ duo trek to not-so-jolly-old England in 1977 to help an impoverished single mom (Francis O’Connor) and her four children under seige by an evil entity in their north London council flat. Not only do the poor kids have to endure the Bay City Rollers and David Soul beaming down from bedroom posters, but they’re being terrorized by the cranky spirit of the old codger who died in the wornout armchair in their living room. It occasionally inhabits the body of 11-year-old Janet (Madison Wolfe), causing lots of Linda Blair-style possession shtick.

Many long minutes are spent trying to summon dread through inanimate objects, like a toy fire-truck that keeps turning on and driving around, lights on and siren beeping. Not all that scary. Then there’s the haunted TV-remote that keeps switching to a station showing a speech by Britain’s Iron Lady, Margaret Thatcher. That’s a little scarier.

Much time is also devoted to the clairvoyant Lorraine’s trancelike visions, which set up formulaic jump-scares and sound-effects wanks that go on forever, signifying nothing. At one point she envisions Ed being killed by a tree branch through the torso, leading pained viewers to hope that the corny guy with the Elvis sideburns soon “gets wood” and that it brings a welcome end to this cluttered exercise in Exorcist-inspired overkill.

One response to “The Conjuring 2 is so long it hurts”