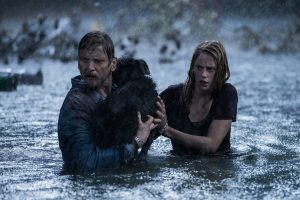 When it comes to waterborne terrors with teeth, there have always been three on my scariest list. The first, thanks to the traumatizing opening scene of Jaws, is the great white shark. Coming in a close second is the piranha, ’cause I heard as a kid that if you fell in the Amazon River a swirling school of those suckers could pick your bones clean in seconds. And then firmly entrenched at number three was the 14-foot alligator because, hey, have you noticed the evil eyes on those bad boys?

After seeing Crawl, though, I gotta admit that death by gator has now rocketed to the top of my chart as far as nasty ways to kick the bucket soaking wet go. Sorry Spielberg.

Kaya Scodelario stars as heroine Haley, who we first see competing at a university swim meet in Florida. Swimming is her passion, and ties her emotionally to her father Dave (Barry Pepper), who always pushed her to excel and become an “apex predator” in the pool. But Haley also blames the long hours her dad spent focusing on her sport for causing the breakup of his marriage, and that whole unspoken family-drama thing will rear its ugly head just when ugly alligator heads with evil eyes and fiercely snapping jaws force Haley and her dad to finally deal with it.

With a Category 5 hurricane fast approaching, Haley grabs her dog and drives into the blatantly CGI storm in search of her missing construction-worker pop. She finds him unconscious in the grimy crawlspace of their old home, suffering from alligator bites, and that’s when the movie becomes a nonstop thrill ride as the two desperately try to avoid being eaten or drowning in the ensuing flood.

As he did with his remake of The Hills Have Eyes, director Alexandre Aja cranks the tension up to 10, and the two stars gamely embrace the pain and suffering of their do-or-die roles. All in all, Crawl is a hoot for horror fans, although I doubt it’ll impress the Everglades Tourism Board much.