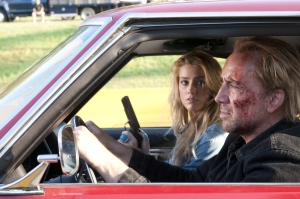 Fifteen minutes into Drive Angry 3D, I was pretty impressed, thinking it might actually be Nicolas Cage’s coolest movie since 1997’s Face/Off.

It starts off with a rip-roaring car chase and some expertly choreographed ultraviolence, plus some eye-popping use of 3-D effects. Too bad that kinetic ferocity fizzles out about halfway through the film.

DA3D is an over-the-top, supernatural action-gore epic that aims for the same type of frenzied vibe as last year’s Machete, but instead of slashing blades, it goes heavy on the bullets. The main gunslinger is Milton (Cage), who drives a ’64 Riviera straight outta Hades to avenge the brutal slaying of his daughter and rescue his infant granddaughter, who has been kidnapped by a satanic-cult leader with charismatic sideburns (Billy Burke).

Early on, Milton hooks up with a hot white-trash waitress (Amber Heard) because she’s got the ’69 Charger he needs to get where he’s going in style—and to, hopefully, stay one step ahead of Satan’s envoy, the Accountant (William Fichtner).

There isn’t much to Vancouver-raised director Patrick Lussier’s film besides mayhem and muscle cars, but he sure gets those things right. The scene where Milton wipes out an entire gang of attackers one by one without actually removing himself from the floozy he’s screwing with his clothes on is quite memorable. More so than his line: “I never disrobe for a gunfight.”

The 3-D skills that Lussier honed on his 2009 slasher flick My Bloody Valentine come in handy for the flying body parts and ejected shotgun shells of his latest, and he earns Brownie points for using character actors like genre vet Tom Atkins and Eastbound & Down’s irrepressible Katy Mixon.

But Drive Angry 3D starts spinning its wheels right around the time that David Morse shows up to phone in his role as Milton’s old mechanic buddy, and not even the smoking-hot ’71 Chevelle SS his hollow character provides can get it back on track.